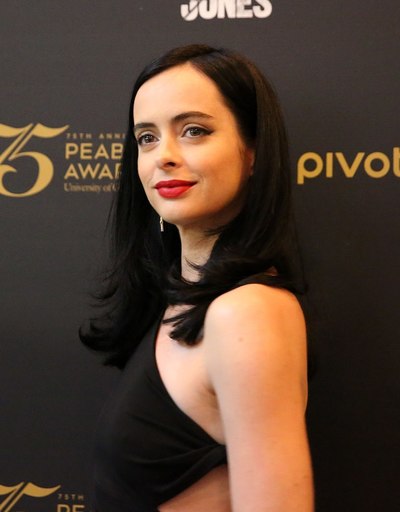 Krysten Alyce Ritter (born December 16, 1981) is an American actress, musician, author and former model. Ritter is known for her roles as lead superheroine Jessica Jones on the Marvel Cinematic Universe series Jessica Jones and The Defenders, Jane Margolis on the AMC drama series Breaking Bad, and Chloe on the ABC comedy series Don't Trust the B---- in Apartment 23. She has appeared in films such as What Happens in Vegas (2008), 27 Dresses (2008), Confessions of a Shopaholic (2009), She's Out of My League (2010), Veronica Mars (2014), and Big Eyes (2014). She has also had roles in the television series Gravity, 'Til Death, Veronica Mars, Gossip Girl, and The Blacklist.

Ritter was born in Bloomsburg, Pennsylvania, the daughter of Garry Ritter and Kathi Taylor. She was raised on a farm outside Shickshinny, Pennsylvania, where her mother, stepfather and sister live; her father lives in nearby Benton. Ritter graduated in 2000 from Northwest Area High School. Ritter is of German, Scottish, and English descent.

Ritter was scouted by a modeling agent at her local shopping mall, the Wyoming Valley Mall, at the age of 15, at a modeling event. Ritter described herself at the time as "tall, gawky, awkward, and really, really skinny" to Philadelphia Style magazine. While in high school, she traveled to New York City on her days off and began modeling there and in Philadelphia. She signed with the Elite Model Management agency and then with Wilhelmina Models. Ritter moved to New York City at the age of 18 and established an international-modeling career in print ads and on television. She did magazine, catalog, and runway work in Milan, New York, Paris, and Tokyo.

Ritter's acting career began when Wilhelmina placed her for an audition for a Dr Pepper television commercial. Ritter told Philadelphia Style that she felt her "outgoing and bubbly and funny" personality as a performer helped her transition into acting naturally by letting her entertain the casting people. She won several bit film roles starting in 2001, and then played a 1950s art history student in Julia Roberts' Mona Lisa Smile (2003). In 2006, she appeared in All This Intimacy, a two-act, Off-Broadway play by Rajiv Joseph, at the Second Stage Theatre. Ritter signed on to star in the premiere of Zach Braff's play, All New People, at Second Stage Theatre. Anna Camp, David Wilson Barnes and Justin Bartha co-starred in the production under the direction of Peter DuBois.

Ritter had a number of guest starring roles on television, and appeared on the second season of Veronica Mars, playing Gia Goodman, the daughter of mayor Woody Goodman (Steve Guttenberg). Ritter guest-starred on Gilmore Girls for eight episodes from 2006 to 2007 as Rory Gilmore's friend, Lucy. She also played the first iteration of Allison Stark on the Fox sitcom 'Til Death (which eventually had four actresses play that role through its run).

Ritter continued working in film, often cast as the best friend of the lead character. In 2008, she had supporting roles in the romantic comedies What Happens in Vegas and 27 Dresses. She co-starred in the 2009 film Confessions of a Shopaholic as Suze, the best friend of Isla Fisher's character. Ritter spent three months shooting She's Out of My League in Pittsburgh in 2008. She played Patty, the cynical best friend of Alice Eve's character Molly.

Ritter was cast as a young Carol Rhodes in an episode of The CW's teen drama series Gossip Girl titled "Valley Girls", which aired May 11, 2009. The episode was a backdoor pilot for a proposed spin-off series of the same title, set in 1980s Los Angeles, that would chronicle the teenage years of the character Lily van der Woodsen. Ritter described her character Carol, Lily's sister, as "the outcast", and "an '80s Sunset Strip rocker" to Access Hollywood. The series was not picked up by the network for the 2009–10 season.

Ritter co-starred as Jane Margolis on the second season of AMC's drama series Breaking Bad, and starred in the film How to Make Love to a Woman (2009), based on a best-selling book by adult film star Jenna Jameson. She also co-starred with Jason Behr in the independent film The Last International Playboy (2009), as Ozzy, a drug addict. Ritter sold a television pilot that she wrote based on her experiences as a model, named Model Camp. She appeared in the comedy web series Woke Up Dead in 2009, playing Cassie alongside Jon Heder as Drex.

In 2010, Ritter starred in the television series Gravity alongside Ivan Sergei, Ving Rhames, and Rachel Hunter, playing the sharp and quirky Lily. The Starz comedy-drama centers on a group of out-patient suicide survivors. She starred opposite Ben Barnes in the 2011 comedy film Killing Bono as the manager of an Irish band. Directed by Nick Hamm, the film is based on Killing Bono: I Was Bono's Doppleganger, a book about the early days of the Irish rock band U2. Beginning in January 2010, the film's shoot lasted for six weeks and moved from Belfast to London before returning to Belfast.

Ritter starred alongside Alicia Silverstone in the comedy horror film Vamps, written and directed by Amy Heckerling. She plays a New York City socialite turned into a vampire by a vampire queen (Sigourney Weaver). She also stars in the 2011 independent comedy film Life Happens, with Kate Bosworth and Rachel Bilson. Co-written by Ritter with director Kat Coiro, the film is about two best friends dealing with the pregnancy and subsequent motherhood of Ritter's character.

In early February 2011, Ritter joined the cast of the ABC sitcom Don't Trust the B---- in Apartment 23, playing the title role of Chloe, a New York City party girl and con artist who tries to rip off her new roommates after they move in, but who ends up befriending and "mentoring" one of the applicants. The series was canceled on January 22, 2013 after two seasons. On February 15, 2013, it was reported that Ritter would star as Nora in the NBC comedy pilot Assistance, based on Leslye Headland's play of the same name. However, it was confirmed in January 2014 that the pilot would not be picked up to series. On July 9, 2013, it was announced that Ritter would star in Jake Hoffman's directorial debut, Asthma, which centers on the indie rock scene in New York City. It was announced on February 20, 2014 that Ritter would star on NBC's astronaut-themed comedy pilot Mission Control as aerospace engineer Dr. Mary Kendricks. On October 15, 2014, NBC announced that it was no longer moving forward with the show.

On December 5, 2014, Ritter was cast to star in the Marvel Television series Jessica Jones, playing the title role, a former superhero turned private investigator in New York City. On her casting, executive producer and showrunner Melissa Rosenberg stated that Ritter "brings both the hard edge and the vulnerability the role demands". Ritter revealed that she had been reading through the comic book in preparation for the role while also expressing her delight on working with Rosenberg and women in general. All 13 episodes of the first season premiered on Netflix on November 20, 2015. Ritter reprised the role on The Defenders alongside Charlie Cox as Matt Murdock / Daredevil, Mike Colter as Luke Cage and Finn Jones as Danny Rand / Iron Fist, and will reprise her role again in a second season of Jessica Jones in 2018.

Ritter moved from Brooklyn to Los Angeles in 2007. She sings and plays guitar in a band called Ex Vivian. She also promotes animal rights and posed for a 2013 PETA ad campaign warning pet owners of the dangers of leaving dogs in cars during the summer. She has been in a relationship with musician Adam Granduciel since August 2014. She has ADHD, for which she has been taking Ritalin ever since she was in first grade.