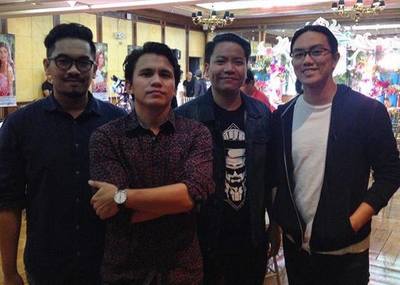 Sponge Cola (sometimes spelled Spongecola) is a Filipino rock band formed in 1998. The band is composed of Yael Yuzon on vocals and guitars, Gosh Dilay on bass, Armo Armovit on guitars and drummer Tmac Cruz.

One of the most popular rock bands in the Philippines, the band produced many hit songs including Jeepney, KLSP, Gemini, Bitiw, Tuliro, Di Na Mababawi, Tambay, Kay Tagal Kitang Hinintay, and XGF. To date, the band have released several albums that went successful.

The band formed between 1998 and 2002, Ysmael "Yael" Yuzon and Reynaldo "Gosh" Dilay (both from Ateneo de Manila High School) met through the school's theatre guild, Teatro Baguntao. Yuzon decided to form a band with Dilay and two other members of Teatro Baguntao. They named the group Sponge after R.S. Surtees' Mr. Sponge Sporting Tour, and the band won in several high school competitions boosting their popularity on campuses and in other schools.

After a couple of lineup changes, drummer Christopher "Chris" Cantada and Rampqueen guitarist Erwin "Armo" Armovit joined the band permanently. Later on, they heard of a Detroit grunge band already using the name Sponge. "But we wanted to keep the word Sponge in our band name because people have already associated us with that name...so we decided to add 'Cola', since it's an easy enough word to remember," Yuzon said. Sponge Cola was officially formed in summer of 2003. In the midst of touring the healthy local gig circuit during their senior year in high school, they released a 5-track, all original, self-titled EP in 2003. It is from here that critics and music aficionados immediately took note of the songs "Lunes (trans: Monday)" and "Jeepney", slowly creating buzz in the underground music scene. In the same year, the band performed a cover of Madonna's seminal classic "Crazy for You", a bootlegged copy of which was shared and downloaded immensely via peer-to-peer networks. This, along with the EP, helped the band break into mainstream consciousness and popularity, gaining extensive airplay from several local pop and rock radio stations.