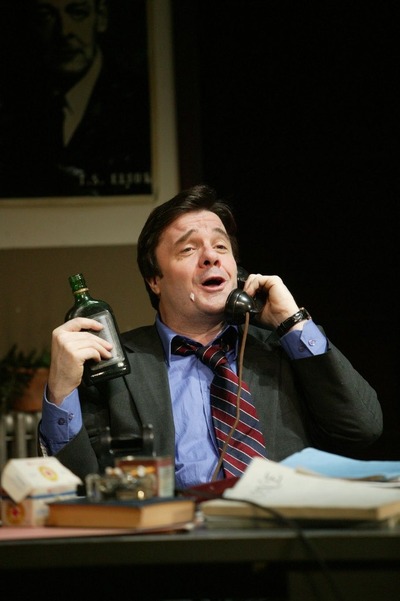 Nathan Lane is a two-time Tony and Emmy Award-winning American actor of stage, screen, and television. He is best known for his roles as Mendy in The Lisbon Traviata, Albert in The Birdcage, Max Bialystock in the musical The Producers, Ernie Smuntz in MouseHunt, Nathan Detroit in Guys and Dolls, Pseudolus in A Funny Thing Happened on the Way to the Forum, and his voice work in The Lion King and Stuart Little. In 2006, he received a star on the Hollywood Walk of Fame, and in 2008 he was inducted into the American Theatre Hall of Fame.

Lane was born Joseph Lane in Jersey City, New Jersey, the son of Irish American Catholic parents. He was named after his uncle, a Jesuit priest. His father, Daniel, was a truck driver and an aspiring tenor who died from alcoholism when Lane was eleven; his mother, Nora, was a housewife and secretary who suffered from manic-depression, and died in 2000. He has two brothers, Robert and Daniel. Lane attended Roman Catholic schools in Jersey City, including Jesuit-run St. Peter's Preparatory High School, where he was selected Best Actor in 1974.

His brother Dan accompanied him to what was supposed to be his first day at St. Joseph's College in Philadelphia, where he had received a drama scholarship. When they arrived, they learned he still couldn't cover enough of the expenses for him to stay without taking out another student loan, so he decided to go back home. "I remember him saying to me, 'College is for people who don't know what they want to do,'" Dan Lane recalled. Because there already was a Joseph Lane registered with Actors Equity, he changed his name to Nathan after the character Nathan Detroit from the musical Guys and Dolls. He moved to New York City where, after a long struggle, his career began to take off, first with some brief success in the world of stand-up comedy with partner, Patrick Stack, and later with Off-Broadway productions at Second Stage Theatre, the Roundabout Theatre, the Manhattan Theatre Club, and his 1982 Broadway debut in a revival of Noël Coward's Present Laughter as Roland Maule (Drama Desk nomination) with George C. Scott, Kate Burton, Dana Ivey, and Christine Lahti.

In 1991, Lane starred with George C. Scott again in a revival of Paul Osborne's On Borrowed Time at the Circle in the Square Theatre on Broadway. In 1992, he starred in the hit revival of Guys and Dolls, receiving his first Tony nomination, as well as Drama Desk and Outer Critics Circle Awards, playing the character who lent him his name, opposite Peter Gallagher and Faith Prince.

A reporter once asked Lane if he was gay; he replied, "I'm 40, single and work a lot in the musical theater. You do the math."  When he told his mother he was gay, she replied, "I'd rather you were dead," to which he replied, "I knew you'd understand." Lane, who came out publicly after the death of Matthew Shepard, has been a long-time board member of and fundraiser for Broadway Cares/Equity Fights AIDS, and has been honored by the Human Rights Campaign, Gay & Lesbian Alliance Against Defamation, and The Trevor Project for his work in the LGBT community.