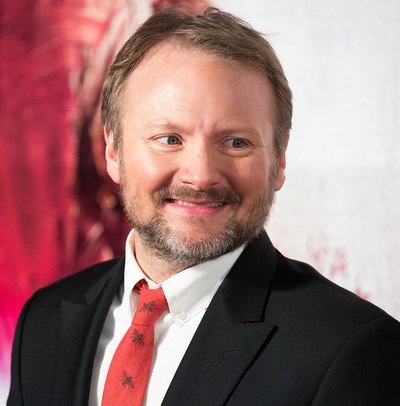 Johnson was born in Silver Spring, Maryland. He grew up in Denver, Colorado, and was raised in San Clemente, California, since he was in sixth grade. He later attended San Clemente High School (graduating in 1992), where Brick was predominantly filmed. He attended the University of Southern California and graduated from the USC School of Cinematic Arts in 1996. Johnson's first short film, Evil Demon Golfball from Hell!!!, which is loosely based on Edgar Allan Poe's "The Tell-Tale Heart", was included as an easter egg on the Looper Blu-ray.

Johnson's film career, as told to Robert K. Elder, author of The Film That Changed My Life, was largely inspired by Annie Hall, a film that he said "broke so many rules in terms of film narrative." He stated: "It moved me in a way that very few other films have moved me. That's something that, I pray to God, if I am able to keep making movies, I can only hope, twenty years down the line maybe, I'll be able to approach."

His debut film, Brick, made for just under $500,000, is a crime drama. Johnson has often said that he looked to the novels of Dashiell Hammett as inspiration for the film's unique use of language. While the film is classified as a film noir, Johnson claims that no references were made to film noir during production, so as to focus the production away from reproducing a genre piece. Brick was released on DVD by Focus Features.

Johnson directed the video for the Mountain Goats' song "Woke Up New" in 2006. He is a professed fan of the band, and was asked to direct the video when bandleader John Darnielle noticed a reference to them in the credits for Brick. A song is credited to "The Hospital Bombers Experience", which is a reference to the Mountain Goats song titled "The Best Ever Death Metal Band in Denton". Johnson also directed a live performance film of the Mountain Goats' 2009 album The Life of the World to Come. The film consists of a single shot, depicting Darnielle performing the entire album on guitar and piano with minimal accompaniment. This film was screened in New York City, Chicago, Seattle, and Portland, Oregon upon its completion, and was released as a limited edition DVD on Record Store Day (April 17, 2010).

Johnson's second film, The Brothers Bloom, is a con-man story released in theaters in May 2009, and later on DVD by Summit Entertainment.

Johnson's third film, Looper, began shooting in Louisiana on January 24, 2011, and was released on September 28, 2012, by TriStar Pictures and FilmDistrict. Set in the near future, it has been described as dark science fiction, and involves hitmen whose victims are sent from the future. The film opened the 2012 Toronto International Film Festival and the 2012 Palo Alto International Film Festival. Looper was a surprise success at the box office.

Johnson has made a number of short films, some of which are available on his website. His short film from high school titled Ninja Ko is available as an easter egg on the Brick DVD. The Brothers Bloom DVD features a short, Buster Keaton-esque silent film he made in college. After working with Joseph Gordon-Levitt on Brick, the two shot a short film in Paris, France titled Escargots. In 2002, he directed a short film titled The Psychology of Dream Analysis, which is available to view on his Vimeo account.

In March 2010, Johnson announced on his website that he was directing an episode of the TV series Breaking Bad for its third season. The episode, "Fly", aired on May 23, 2010. Johnson later directed a second episode of the show, "Fifty-One", which aired on August 5, 2012, and earned him a Directors Guild of America Award. He directed a third episode of the show, "Ozymandias", which quickly became widely considered as one of the greatest episodes of television ever aired.

On June 20, 2014, news broke that Johnson would write and direct the eighth installment in the Star Wars film series. Johnson confirmed the report that following month and the film, Star Wars: The Last Jedi, was released on December 15, 2017, to positive reviews from critics and audiences.

After Colin Trevorrow departed Episode IX, Johnson turned down an offer from Lucasfilm to write and direct the follow-up to The Last Jedi. On November 9, 2017, it was announced that Johnson would write a new trilogy of Star Wars films, separate from the main story arc of previous films in the franchise, and would direct the first installment of his trilogy.

On September 4, 2018, it was announced that Rian Johnson was directing the murder mystery film Knives Out starring Daniel Craig. Johnson penned the script and worked with longtime producing partner Ram Bergman.

In September 2019, Rian Johnson and producer Ram Bergman launched T-Steet, an entrepreneurial company that will generate original content for film and TV shows. The venture is fully capitalized by global media company Valence Media. T-Street launched with a first look deal with Valence Media's Media Rights Capital for film and television projects. Valence Media holds a substantial minority equity stake in the company. Johnson and Bergman intend to make their own original creations through the company, and produce others.

Aside from filmmaking, Johnson is a folk singer and banjo player. His brother is music producer Aaron Johnson. His cousin, Nathan Johnson, composed the scores for Brick, The Brothers Bloom, and Looper. Rian and Nathan make up a folk duo called the Preserves.

Johnson has been married to film writer and podcaster Karina Longworth since 2018.