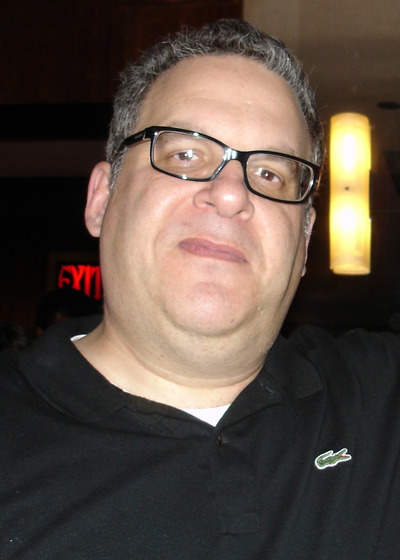 Jeffrey "Jeff" Garlin (born June 5, 1962) is an American comedian, actor, producer, voice artist, director, writer, podcast host and author. He has acted in many television shows and some movies, but is best known for his role as Jeff Greene on the HBO show Curb Your Enthusiasm.

Garlin was born in Chicago, Illinois, on June 5, 1962, and grew up in Morton Grove, Illinois where his father had a plumbing supply business and his mother was active in community theater. Garlin is Jewish and attended Hebrew school. He graduated from Fort Lauderdale's Nova High School in 1980. He attended Broward Community College, followed by a stint at the University of Miami studying film, but eventually dropped out. He began performing stand-up comedy there.

In 1984, at the age of 22, Garlin moved back to Chicago, to perform with the comedy troupe The Second City, into which he had been accepted, as well as to pursue a stand-up comedy career there. Several years later, he was roommates with Conan O'Brien, who was then a comedy writer. (He remains close to O'Brien, and after O'Brien was removed as host of The Tonight Show in 2010 so that Jay Leno could return, Garlin stated that he would not be a guest on the show again.)

Garlin has a variety of television and film appearances to his credit, as an actor and a stand-up, including Dr. Katz, Arrested Development, Everybody Loves Raymond, Late Show with David Letterman, Tom Goes to the Mayor, The Life and Times of Tim, The Daily Show, Late Night with Conan O'Brien, and Entourage. Garlin appeared with Eddie Murphy in Daddy Day Care and appeared in Steven Soderbergh's Full Frontal.