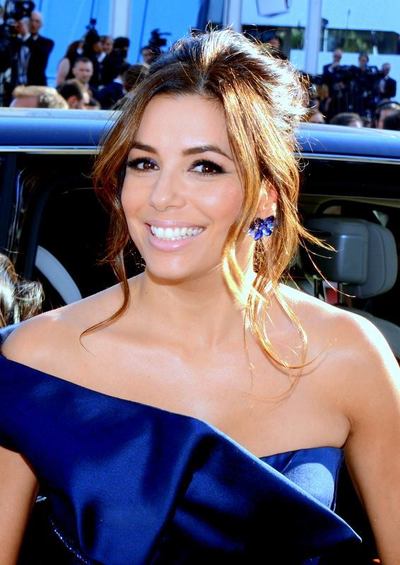 Eva Jacqueline Longoria Bastón (born March 15, 1975) is an American actress, producer, director, activist and businesswoman. After a series of guest roles on several television series, Longoria was first recognized for her portrayal of Isabella Braña on the CBS daytime soap opera The Young and the Restless, on which she starred from 2001 to 2003. She is perhaps best known for her role as Gabrielle Solis on the ABC television series Desperate Housewives from 2004 to 2012, for which she was well received and was the recipient of Golden Globe and Screen Actors Guild Award nominations. She has also appeared in Harsh Times (2005), The Sentinel (2006), and Over Her Dead Body (2008). From 2015 to 2016, Longoria starred as Ana Sofia Calderón on the short-lived NBC sitcom Telenovela, and currently serves as an executive producer for the Lifetime television series Devious Maids.

Longoria has also appeared in several advertising campaigns and has been named one of Hollywood's most beautiful women by several publications, including People en Español and People magazines. She currently holds contracts with L'Oréal, Hanes, and New York & Co, among others.

Longoria was born in Corpus Christi, Texas, the youngest of four daughters born to ninth-generation Mexican-American (Tejano) parents Ella Eva (Mireles) and Enrique Longoria, Jr. She was raised Roman Catholic. While in high school, she worked at a Wendy's restaurant part-time for three years.

Longoria received her Bachelor of Science degree in kinesiology at nearby Texas A&M University-Kingsville. During this time, she won the title of Miss Corpus Christi USA in 1998. After completing college, Longoria entered a talent contest that led her to Los Angeles; shortly after, she was spotted and signed by a theatrical agent. While auditioning for roles, Longoria worked as a headhunter for four years.

She received her master's degree in Chicano Studies from California State University, Northridge, in May 2013 following three years of study. Her thesis was entitled, "Success STEMS From Diversity: The Value of Latinas in STEM Careers."

Longoria landed her first television role in 1999 after meeting Executive Producer Gary Ghiaey at a political reception in Los Angeles Longoria guest-starred in an episode of Beverly Hills, 90210. Another guest appearance in General Hospital the same year brought her big break on the CBS Daytime soap opera The Young and the Restless, portraying Isabella Braña from 2001 to 2003. After leaving The Young and the Restless, Longoria appeared in the Dick Wolf revival of Dragnet. Following Dragnet, she starred in Señorita Justice, a poorly received direct-to-video film, and a television film titled The Dead Will Tell.

In 2003, Longoria was cast as Gabrielle Solis in the ABC comedy-drama Desperate Housewives, later commenting on her career success by stating, "I think it's funny when people say I'm an overnight sensation, because I've been working at it for 10 years." Shortly after her debut on Desperate Housewives, Longoria starred in a direct-to-video film titled Carlita's Secret, for which she was also co-producer.

In 2006, she was nominated for a Golden Globe Award for Best Performance by an Actress in a Television Series – Musical or Comedy along with her co-stars in Desperate Housewives. Longoria was awarded the ALMA Award and named entertainer of the year that year. She also starred opposite Michael Douglas and Kiefer Sutherland in the 2006 thriller The Sentinel, which was her first major role in a theatrical feature movie. In 2006, she played the character Sylvia in Harsh Times, starring Freddy Rodriguez and Christian Bale.

In the 2000s, Longoria appeared in several high-profile advertising campaigns and numerous men's magazines, reaching No. 14 in the FHM "Sexiest Women 2008" poll. She was featured on the cover of various international women's magazines, including Vogue, Marie Claire and Harper's Bazaar. People en Español listed her among its "Most Beautiful People" for 2003. Longoria continues to be included in lists of Hollywood's Most Beautiful. She was listed as No. 1 in Maxim's Hottest Female Stars of 2005 and 2006, becoming the first woman to top the list in two consecutive years. She was ranked No. 9 in the magazine's Hot 100 of 2007 list. In honor of Maxim's 100th issue in 2006, Longoria was featured on a 75-by-110-foot (23 by 34 m) vinyl mesh replica of its January 2005 cover located in a Clark County, Nevada desert. More recently, she was ranked No. 14 of People's Most Beautiful 2011. People named her one of 2012 Most Beautiful at Every Age.

In January 2007, Longoria was chosen to be the first face of Bebe Sport. She appeared in the Spring/Summer 2007 campaign, photographed by Greg Kadel. The actress also holds contracts with L'Oréal, Hanes, and New York & Co. Longoria also contracts with Magnum Ice-Cream, and Heineken. She is a part of Microsoft's "I'm A PC" ad campaign. She and Tony Parker have appeared together in campaigns for London Fog. Longoria became a spokesperson for L'Oréal Paris in 2005 and continued to feature in L'Oréal TV commercials and print ads until the year 2010. In the summer of 2010 Longoria served as a judge on The Next Food Network Star. In October, Longoria hosted the MTV Europe Music Awards 2010 in Madrid, Spain.

Based on her earnings from June 1, 2009 to June 1, 2010, Longoria was ranked No. 4 on Forbes Prime Time's 10 Top-Earning Women with an estimated $12 million. Longoria topped the Forbes magazine's list of the highest-paid TV actresses for 2011.

In 2013, Longoria professed that she is a "cat lady" and appeared as a spokesperson for Sheba cat food.

From 2013, she served as one of the executive producers of Devious Maids and directed the season two premiere, "An Ideal Husband". In 2016, she also starred in the fourth season, in the episode "Once More Unto the Bleach". She is also an executive producer of the documentaries The Harvest and Food Chains.

In 2015, NBC announced plans for a sitcom called Telenovela in which Longoria starred as a popular telenovela actress. It was filmed with a single camera. It ran for only one season.

Longoria was married to actor Tyler Christopher, star of General Hospital, from 2002 to 2004.

Longoria met Tony Parker, Spurs point guard, in November 2004. On November 30, 2006, the couple became engaged. They married in a civil service on July 6, 2007, at a Paris city hall. They had a full, Catholic wedding ceremony at the Saint-Germain l'Auxerrois Church in Paris on Saturday, July 7, 2007. On November 17, 2010, Longoria filed for divorce from Parker in Los Angeles, citing "irreconcilable differences". In the divorce petition, Longoria requested that her maiden name be restored. She also sought spousal support from Parker. The couple had a prenuptial agreement that was signed in June 2007, a month before their wedding, and amended two years later in June 2009.

That day Longoria told her friend (Mario Lopez) that she had discovered hundreds of text messages from another woman on her husband's phone. Extra identified the other woman as Erin Barry, the then-wife of Brent Barry, Parker's former teammate, and revealed that the Barrys also were in the process of divorcing. In light of the divorce, Longoria cancelled her scheduled appearance at the 2010 American Music Awards. On November 19, 2010, Parker filed for divorce from Longoria in Bexar County, Texas, on the grounds of "discord or conflict of personalities", thus establishing a legal battle over where the divorce case would be heard. Unlike Longoria's divorce petition, Parker's did not mention a prenuptial agreement and claimed that the parties would "enter into an agreement for the division of their estate". The divorce was finalized in Texas on January 28, 2011, the same day Longoria's lawyer filed papers to dismiss her Los Angeles petition.

On December 13, 2015, Longoria reported her engagement to businessman Jose Antonio Bastón. The couple were married in Mexico on May 21, 2016.