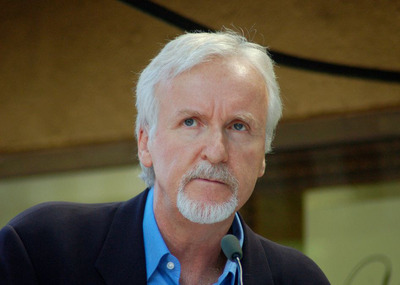 James Francis Cameron (born August 16, 1954) is a Canadian film director, film producer, deep-sea explorer, screenwriter, and editor. He first found success with the science-fiction hit The Terminator (1984). He then became a popular Hollywood director and was hired to write & direct Aliens (1986) and three years later followed up with The Abyss (1989). He found further critical acclaim for his use of special effects in the action packed blockbuster Terminator 2: Judgment Day (1991). After his film True Lies (1994) Cameron took on his biggest film at the time Titanic (1997) which won the Academy Award for Best Picture and him the Academy Award for Best Director and Film Editing. After Titanic, Cameron began a project that took almost 10 years to make, his science-fiction epic Avatar (2009), for which he was nominated for Best Director and Film Editing again. In the time between making Titanic and Avatar, Cameron spent several years creating many documentary films (specifically underwater documentaries) and co-developed the digital 3D Fusion Camera System. Described by a biographer as part-scientist and part-artist, Cameron has also contributed to underwater filming and remote vehicle technologies. On March 26, 2012, Cameron reached the bottom of the Mariana Trench, the deepest part of the ocean, in the Deepsea Challenger submersible. He was the first person to do this in a solo descent, and only the third person to do so ever.

He has been nominated for six Academy Awards overall and won three for Titanic. In total, Cameron's directorial efforts have grossed approximately US$2 billion in North America and US$6 billion worldwide. Not adjusted for inflation, Cameron's Titanic and Avatar are the two highest-grossing films of all time at $2.19 billion and $2.78 billion respectively. In March 2011 he was named Hollywood's top earner by Vanity Fair, with estimated 2010 earnings of $257 million.

Cameron was born in Kapuskasing, Ontario, Canada, in 1954, the son of Shirley (née Lowe), an artist and nurse, and Phillip Cameron. His paternal great-great-great-grandfather emigrated from Balquhidder, Scotland in 1825; thus, he descends from Clan Cameron.

Cameron grew up in Chippawa, Ontario, with his only brother Mike. He attended Stamford Collegiate School in Niagara Falls, Ontario. In 1971, his family moved to Brea, California, when Cameron was 17 years old. Cameron enrolled at Fullerton College, a 2-year community college, in 1973 to study physics. He switched to English, then dropped out before the start of the fall 1974 semester.

After dropping out of Sonora High School, he went to further his secondary education at Brea Olinda High School. After graduating, he worked several jobs such as truck driving and wrote when he had time. During this period he taught himself about special effects: "I'd go down to the USC library and pull any thesis that graduate students had written about optical printing, or front screen projection, or dye transfers, anything that related to film technology. That way I could sit down and read it, and if they'd let me photocopy it, I would. If not, I'd make notes."

After seeing the original Star Wars film in 1977, Cameron quit his job as a truck driver to enter the film industry. When Cameron read Syd Field's book Screenplay, it occurred to him that integrating science and art was possible, and he wrote a ten-minute science fiction script with two friends, entitled Xenogenesis. They raised money and rented camera, lenses, film stock, and studio, and shot it in 35mm. To understand how to operate the camera, they dismantled it and spent the first half-day of the shoot trying to figure out how to get it running.

After completing a screenplay for The Terminator, Cameron decided to sell it so that he could direct the movie. However, the production companies he contacted, while expressing interest in the project, were unwilling to let a largely inexperienced feature film director make the movie. Finally, Cameron found a company called Hemdale Pictures, which was willing to let him direct. Gale Anne Hurd, who had started her own production company, Pacific Western Productions, had previously worked with Cameron in Roger Corman's company and agreed to buy Cameron's screenplay for one dollar, on the condition that Cameron direct the film. Hurd was signed on as producer, and Cameron finally got his first break as director.Orion Pictures distributed the film.

For the role of the Terminator, Cameron envisioned a man who was not exceptionally muscular, who could "blend into" a crowd. Lance Henriksen, who had starred in Piranha II: The Spawning, was considered for the title role, but when Arnold Schwarzenegger and Cameron first met over lunch to discuss Schwarzenegger playing the role of Kyle Reese, both came to the conclusion that the cyborg villain would be the more compelling role for the Austrian bodybuilder; Henriksen got the smaller part of LAPD detective Hal Vukovich and the role of Kyle Reese went to Michael Biehn. In addition, Linda Hamilton first appeared in this film in her iconic role of Sarah Connor, and later married Cameron.

The Terminator was a box office hit, breaking expectations by Orion Pictures executives that the film would be regarded as no more than a sci-fi film, and only last a week in theaters. It was a low-budget film which cost $6.5 million to make, cutting expenses in such ways as recording the audio track in mono. However, The Terminator eventually earned over $78 million worldwide.

James Cameron is the director in Avatar.