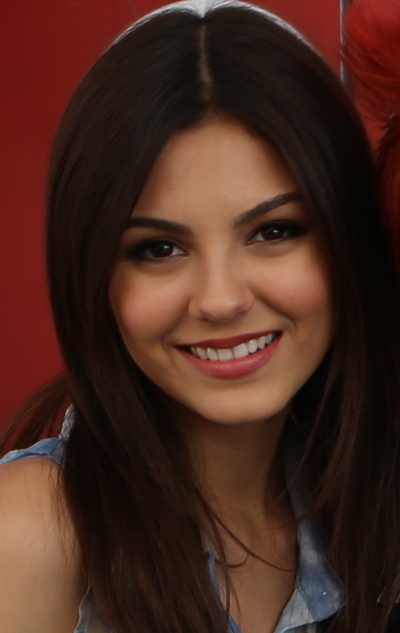 Victoria Dawn Justice (born February 19, 1993) is an American actress, singer-songwriter, and dancer. She debuted as an actress at the age of 10 and has since appeared in several films and television series including the Nickelodeon series Zoey 101 and Victorious. She has made appearances in several theatrical releases, including Unknown as well as the 2006 thriller The Garden. She has appeared in numerous Nickelodeon series, including True Jackson, VP, The Troop, The Penguins of Madagascar and iCarly, as well as on the Nickelodeon game shows BrainSurge and Figure It Out as a contestant. In 2010, she starred in the Nickelodeon film The Boy Who Cried Werewolf.

Aside from acting, Justice is involved in her musical career. She has performed several songs for the soundtrack to the Nickelodeon musical Spectacular!, in which she starred. She has recorded a number of songs for the Victorious series. Justice has announced the release of her debut album, which is expected to be released sometime during 2013.

Victoria Justice was born on February 19, 1993, in Hollywood, Florida, to Serene and Zack Justice. She has a younger sister named Madison. Her father is of English, German, and Irish descent, and her mother is of Puerto Rican ancestry. Justice first developed an interest in acting when she was 8 years old after watching a children's commercial. She and her family relocated to Hollywood, California, in 2003. In 2005, she auditioned and was accepted into the musical theatre program at Los Angeles' Millikan Performing Arts Academy. Justice has done commercials for companies such as Ralph Lauren, Gap and Guess. She appeared in national commercials for Mervyn's, Peanut Butter Toast Crunch and Ovaltine.

Justice began her acting career when she was 10 years old, when she made a guest appearance on the Gilmore Girls episode "The Hobbit, the Sofa and Digger Stiles". Justice portrayed Jill No. 2 in a walk-on role. After her appearance in the series, her family moved to Los Angeles, when Justice stated she wanted a career in acting. The following year, Justice guest starred on the second episode of the Disney channel series The Suite Life of Zack & Cody, in which she played a young pageant contestant named Rebecca. Later, Justice was awarded a role in the 2005 drama-thriller Mary. Justice portrayed the role of Stella, a young girl who begins seeing visions of Mary Magdalene. The film debuted at 2005 Venice Film Festival, before being showed at several other Festivals, including the 2005 Toronto Film Festival, Deauville Film Festival and the San Sebastián International Film Festival.

During the same year, Justice was awarded a main role in the Nickelodeon series Zoey 101 as Lola Martinez, a new student who is also an aspiring actress. When she found out she had earned the role, she said, "I was extremely happy; I was bouncing up and down and screaming. That was a really great moment." The season 2 episode that introduced Justice's character debuted on September 11, 2005. Justice also had roles in two other films that year. She had a cameo appearance in the R-rated film When Do We Eat?, as well as earning the role of Rose in the Hallmark television film Silver Bells, the following of which has become a Hallmark Hall of Fame film. In 2006, while filming episodes for Zoey 101, Justice made a guest appearance on an episode of the series Everwood, in the episode "Enjoy the Ride". Justice made her theatrical film debut that year, when she was given a cameo role in the film Unknown. The film was a financial failure, and received mixed reviews from critics.