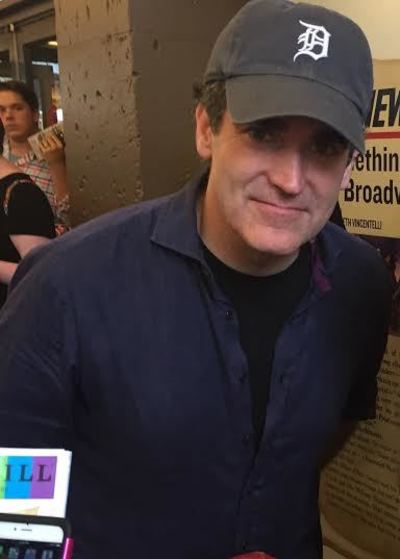 James graduated from Northwestern University's School of Communication. He received a nomination for the Tony Award for Best Featured Actor in a Musical in 2002 for his portrayal of Sidney Falco in Sweet Smell of Success, co-starring John Lithgow. He also received an Obie Award for his performance in the one-man play The Good Thief by Conor McPherson.

Additional Broadway credits include playing Frederick Barrett in Titanic, Lincoln Center's Carousel, and Blood Brothers. Off-Broadway credits include Andrew Lippa's The Wild Party in 2000 opposite Julia Murney and Idina Menzel for which he received a Drama Desk Award nomination, as well as Adam Guettel's Floyd Collins and the Gershwins' Pardon My English. He appeared in Martin McDonagh's The Lieutenant of Inishmore on Broadway, replaced Norbert Leo Butz in Dirty Rotten Scoundrels, and starred in The Apple Tree opposite Kristin Chenoweth.

In 2004, he released a Christmas album titled From Christmas Eve to Christmas Morn. He was the Broadway version of Bob Wallace, whose character was originated by Bing Crosby, in White Christmas in 2004.

He played the role of Dan Goodman in the new musical Next to Normal Off-Broadway at Second Stage Theatre in 2008. He then starred opposite Sutton Foster and Christopher Sieber as the title character in Shrek the Musical. The show began previews on Broadway November 8, 2008 and opened on December 14 at The Broadway Theatre after a tryout in Seattle. For this role James won the Outer Critics Circle Award for Outstanding Actor in a Musical and the Drama Desk Award for Outstanding Actor in a Musical. He was also nominated for the Tony Award for Best Leading Actor in a Musical for his portrayal. He departed the cast after one year in the role and was replaced by Ben Crawford.

James starred alongside Laura Linney, Alicia Silverstone, and Eric Bogosian in the Broadway play, Time Stands Still. It began preview performances on January 5, 2010 and officially opened on January 25 at the Samuel J. Friedman Theatre. The show ended its limited run on March 27, 2010. For this role he won the broadway.com Audience Award for Favorite Featured Actor in a Play.

James was born in Saginaw, Michigan, the son of Mary (née Kelly), a seller of children's books, and Thomas F. James (deceased), a lawyer. His maternal grandfather was Harry Kelly, a former Governor of Michigan. His uncle was Brian Kelly, an actor featured in the series Flipper and a producer of the movie Blade Runner. He has two sisters: Kate James, an actress and writer who performs in the Chicago-based sketch comedy group, Schadenfreude, and Anne James Noonan, also an actress. He also has one brother, Andrew James. Brian is married to Jennifer Prescott, and they have a daughter, Grace, and a Springer Spaniel named Josie.