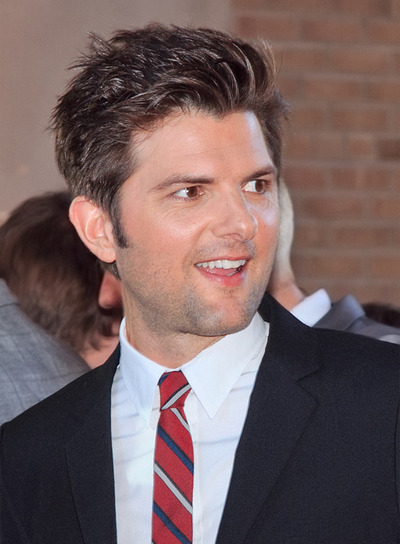 Adam Paul Scott (born April 3, 1973) is an American actor. He is best known for his role as Ben Wyatt in the NBC sitcom Parks and Recreation. He has also appeared as Derek in the film Step Brothers, Henry Pollard in the Starz sitcom Party Down, Jay McPherson in the film Torque, and Adam Yates, Jr. in the film Hot Tub Time Machine 2.

Scott was born in Santa Cruz, California, the son of Anne (née Quartara) and Douglas Scott. He has two older siblings, Shannon and David. Scott has said that David "looks like me but is far more cerebral and inherited the intellect of our parents", both of whom are retired teachers. He graduated from Harbor High School and the American Academy of Dramatic Arts in Pasadena, California.

One of his earliest roles was in Hellraiser: Bloodline. He has appeared in several feature films, including Who Loves the Sun (2006), Monster-in-Law (2005), The Aviator (2004), Torque (2004), High Crimes (2002), Star Trek: First Contact (1996), and The Lesser Evil (1998). In 2007-08, he had a cameo as a nurse in Knocked Up, and played Will Ferrell's character's biological brother Derek in Step Brothers, as well as Josh in the dot-com drama August. Scott played a supporting role in Alexandre Aja's remake Piranha 3-D, playing a character similar to Bradford Dillman's character from the original. He also played Jeremy in Leap Year. Scott's name appears next to Jon Hamm's in the movie Anchorman in one of the broadcast's credits. In an appearance on G4's Attack of the Show program on April 21, 2011, Scott confirmed that this was due to his and Hamm's friendship with producer Shauna Robertson, who put their names in the credits as an Easter egg. He played Ted Hendricks, Walter Mitty's boss, in the 2013 remake of The Secret Life of Walter Mitty.

He appeared in the films Our Idiot Brother (2011) as Jeremy and Bachelorette. He also starred as Jason Fryman in Friends with Kids (2012) alongside real-life friends Jennifer Westfeldt and Hamm.

Alongside recurring Party Down guest star J.K. Simmons, Scott starred as Caleb Sinclaire in the 2009 film The Vicious Kind in a more dramatic role than his previous comedic endeavours. The film itself received positive reviews, with Scott's own performance held in high regard. For his efforts, Scott won two individual awards at two separate film festivals, with writer and director Lee Toland Krieger winning one as well. Scott starred in the film Passenger Side, released on DVD on October 26, 2010. Who Loves The Sun, the film was his second collaboration with writer-director Matt Bissonnette.

Scott's film A.C.O.D., which co-stars Amy Poehler, premiered at the 2013 Sundance Film Festival. Scott was quoted saying that Poehler "is one of my favorite people in the world. She's the best" about his television and now, movie co-star. 2015 worked as executive producer and portrayed Alex, in a supporting role, in the comedy film The Overnight. He also co-starred Toni Collette, Stefania Owen and David Koechner, in Michael Dougherty's Christmas comedy slasher film Krampus.

On television, he appeared as Griff Hawkins in the series Boy Meets World and Josh on Party of Five, as well as David's love interest, Ben Cooper, on Six Feet Under. He played Palek on the HBO drama Tell Me You Love Me (2007). Scott played a cocaine-addicted, delirious baseball front office representative in the first and second seasons of the HBO series, Eastbound & Down. From 2009 to 2010 he appeared on the Starz network show Party Down, created by Rob Thomas. His role as Henry Pollard in Party Down earned him an Entertainment Weekly Ewwy nomination for Best Actor in a Comedy Series in 2009. In 2010 he left Party Down and joined the cast of NBC's Parks and Recreation.