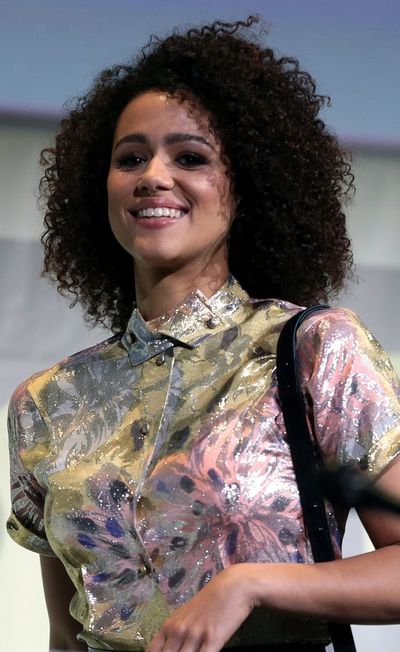 Nathalie Joanne Emmanuel (born 2 March 1989) is an English actress best known for her role as Sasha Valentine in the soap opera Hollyoaks, Computer Hacktivist Ramsey in the action film Furious 7 and as the interpreter Missandei on the HBO fantasy series Game of Thrones.

Emmanuel was born on 2 March 1989 in Southend-on-Sea, Essex, England. Her mother is Dominican and her father is of half Saint Lucian and half English descent. Emmanuel has an older sister, Louise. She attended St Hilda's School, Westcliff-on-Sea from the age of 3 to 11, then moved schools, attending Westcliff High School for Girls from the age of 12.[citation needed]

Emmanuel credits her mother for the initial motivation to become an actress, "When I was 3 and she started dropping me off at school, I always caused such a huge drama that my mum decided maybe I should channel it more properly — so she started me on acting, singing and dancing classes." At the age of 10, she played Young Nala in the West End production of The Lion King. In 2006, she made her television break by starring as Sasha Valentine in the soap opera Hollyoaks. Emmanuel appeared on the show until 2010, her character's storylines included prostitution, and heroin addiction.

In January 2012, Emmanuel presented BBC Three's Websex: What's the Harm?, investigating the online sexual habits of 16-24 year olds in the UK. Later in the same year she made her film debut in the thriller Twenty8k. The following year, she was cast as Missandei, Daenerys Targaryen's interpreter, in HBO's fantasy drama series Game of Thrones.[9] In 2015, Emmanuel was promoted to a regular cast member on the show. In the same year, she played computer hacker Ramsey in the action film Furious 7 and Harriet in the science fiction adventure Maze Runner: The Scorch Trials.