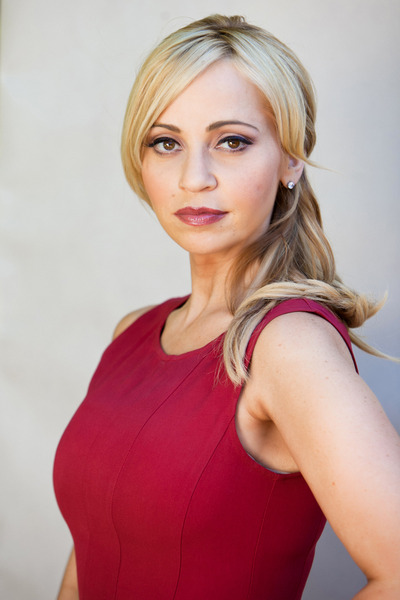 Tara Strong (born Tara Lyn Charendoff; February 12, 1973) is a Canadian–American actress who has done work in numerous films and television series, both live-action and animated. Many of her major voice roles include animated series such as Rugrats, The Powerpuff Girls, The Fairly OddParents, Drawn Together, Teen Titans and the spin-off series Teen Titans Go!, and My Little Pony: Friendship Is Magic, as well as video games such as Mortal Kombat X, Final Fantasy X-2 and the Batman: Arkham series. Her portrayals have garnered nominations in the Annie Awards and Daytime Emmys, and an award from the Academy of Interactive Arts & Sciences.

Strong was born on February 12, 1973, in Toronto, Ontario to Syd and Lucy Charendoff. Her parents ran a convenience store called The Wiz, and Syd had also worked as a pharmacist. She and her older sister Marla were raised in Toronto. At age four, she became interested in acting and volunteered to be a soloist at a school production. She worked with the Yiddish Theater; though she did not know the Yiddish language, she memorized her lines phonetically. She also performed with the Toronto Jewish Theater (TJA), where she acted in A Night of Stars, and was featured in an audiotape for "Lay Down Your Arms" with the Habonim Youth Choir, where she sang the lyrics in both English and Hebrew.

Her first professional role was Gracie in Limelight Theater's production of The Music Man at age 13. She had a guest role in the action series T. and T. Her first major cartoon role was the title role in Hello Kitty's Furry Tale Theater. She starred in the short-lived CBC Television sitcom Mosquito Lake. She took improv classes at The Second City in Toronto[4] and continued acting in both animated and live-action shows and films, before moving to Los Angeles in January 1994.

Strong is the voice of numerous animated characters, including main roles in Fillmore! as Ingrid Third; The Fairly OddParents as Timmy Turner and Poof; Rugrats and All Grown Up! as Dil Pickles; The Powerpuff Girls as Bubbles; Ben 10 as Ben Tennyson, Upgrade, Blitzwolfer, and Buzzshock; Teen Titans and the second version of this show called Teen Titans Go! as Raven; Foster's Home for Imaginary Friends as Terrence; the singing voice of Meg Griffin and additional voices on Family Guy; and My Little Pony: Friendship Is Magic as Twilight Sparkle.

She has also lent her voice to English-language localizations of Japanese anime such as Spirited Away and Princess Mononoke, as well as several video games, including her work as Elisa and Ursula in Metal Gear Solid: Portable Ops; Paz Ortega Andrade in Metal Gear Solid: Peace Walker; Rikku in Final Fantasy X, its sequel Final Fantasy X-2, and Kingdom Hearts II; Talwyn Apogee in Ratchet & Clank Future: Tools of Destruction and its sequel, Ratchet & Clank Future: Quest for Booty; Harley Quinn in Batman: Arkham City, replacing Arleen Sorkin from the franchise; and Juliet Starling, the main character of Lollipop Chainsaw.

She has appeared in live roles in National Lampoon's Senior Trip, Sabrina Goes to Rome, Sabrina, Down Under, and The Last White Dishwasher. She also made guest appearances on such shows as Forever Knight, Street Legal, Touched by an Angel, Take Home Chef, Party of Five, Comic Book: The Movie, Kung Fu: The Legend Continues, and 3rd Rock from the Sun. In January 2013, she voiced the character Plum in Cartoon Hangover's Bravest Warriors, created by Pendleton Ward. She has the role of the character Miss Collins in Nickelodeon's live action series Big Time Rush.

In 2004, she won an Interactive Achievement Award for her role as Rikku in Final Fantasy X-2. She also served as the announcer for the 1999 Kids' Choice Awards, appeared as a guest panelist at several fan conventions (including BotCon, Jacon, Comic-Con International, and Anime Overdose), and was featured on the front cover of the July/August 2004 issue of Working Mother magazine, in which she said, "My son is now old enough to respond to my work. To me, that's what it is all about." Strong has been nominated five times for Annie Awards.

In 2013, Strong won the Shorty Award for "Best #Actress" for her use of social media. The Behind the Voice Actors website selected her for a BTVA Voice Acting Award for Voice Actress of the Year for 2013, and nominated her for the 2011 and 2012 years.

Strong was the roommate of actress Neve Campbell. They both auditioned for the same role of Julia in the 1990s TV series Party of Five, though Campbell ultimately won the role. However, Strong appeared in an episode as the character Lorna.

In 1999, she met Craig Strong, a former American actor-turned real estate agent; they married on May 14, 2000. They have two sons: Sammy (born 2002) and Aden (born 2004). Their family resides in Los Angeles, where they run VoiceStarz, an Internet-based company that teaches people how to get into the voice-over business. Strong and her husband developed and patented a line of baby bottles with caps that their user can set to note the calendar date for breast milk storage.

She was involved with a charity group called Bronies for Good where she helped raise funds for a family whose daughter had a brain tumor. In 2012, during the BronyCon event in New Jersey, she attended a lunch with fans from the military.