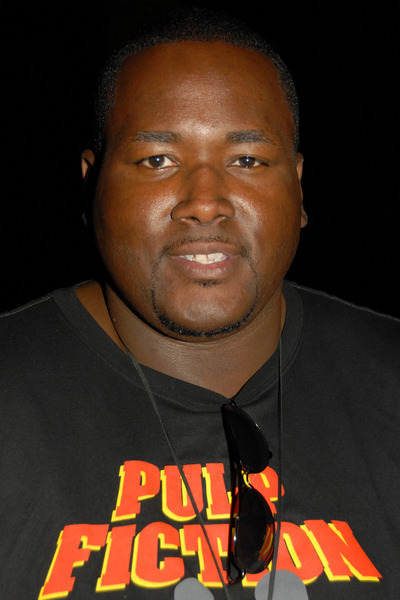 Quinton Aaron (born August 15, 1984) is an American actor whose first lead role was as Michael Oher in the 2009 film The Blind Side.

Aaron was born in The Bronx, New York City and was raised in Augusta, Georgia, by his mother, the late Laura Aaron, who was the author of a book entitled Leave Me Alone (published by Author House under her alias L. A. Aaron). Quinton began singing at an early age. When he was 9, Quinton was baptized and joined the church choir as a mute singer, where he often led songs. He made his acting debut in a Christmas play.

Aaron made his film debut as " The lion guy" in Michel Gondry's Be Kind Rewind, starring Mos Def and Jack Black. He has also appeared in Fighting with Channing Tatum and Terrence Howard and co-starred in a NYU thesis short film called Mr. Brooklyn with Al Thompson (Liberty Kid, A Walk to Remember), directed by Jason Sokoloff.

Aaron has appeared in two episodes of the TV show Law & Order (Season 17, episode "Bling" as a bodyguard and episode "Fallout" as a bouncer).

He starred in his first lead role playing Michael Oher. Quinton starred alongside Sandra Bullock and Tim McGraw in The Blind Side, released November 20, 2009. Directed by John Lee Hancock, the film was adapted from Michael Lewis's 2006 book, The Blind Side: Evolution of a Game, which features the real-life story of Michael Oher. Oher had started in ten games as a guard during his first season with the Ole Miss Rebels, becoming a first-team freshman All American, and later an American football offensive tackle for the Baltimore Ravens.

Aaron auditioned for the role of Michael Oher after his mother found out about the casting call online. Chosen as a finalist, he was flown in to Los Angeles for the final audition. Unsure whether he had been successful, he reached into his pocket on his way to the door and pulled out a card, telling director John Lee Hancock that he knew that it was a long shot for him to get the part but that he did security work and would love to do those services should they be needed for the film. Director Hancock said that he would keep it in mind.