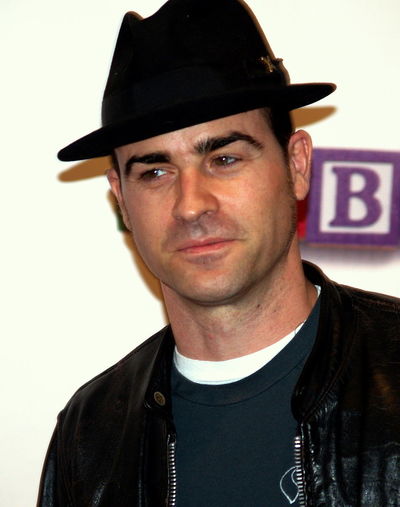 Justin Paul Theroux (born August 10, 1971) is an American actor, director, and screenwriter. He is best known for his work with film director David Lynch, appearing in Mulholland Drive (2001) and Inland Empire (2006). He is also known as a screenwriter for films such as Tropic Thunder, Iron Man 2, Rock of Ages, and Zoolander 2. Since 2014, he has starred in the HBO series The Leftovers.

Theroux was born in Washington, D.C. His mother, Phyllis Grissim-Theroux, is a journalist and author who worked for The Washington Post, and his father, Eugene Theroux, is a lawyer at Baker & McKenzie in Washington. Theroux is the nephew of the travel writer and novelist Paul Theroux, novelist and poet Alexander Theroux, author Peter Theroux, and novelist and educator Joseph Theroux; he is the cousin of British journalists and documentary filmmakers Louis and Marcel Theroux. His father is of half French Canadian and half Italian descent. Through his mother, Theroux is a great-great-grandson of financier, banker and railroad magnate H.B. Hollins, and of music critic and author Gustav Kobbé.

Theroux attended Lafayette Elementary School, Annunciation School, and The Field School. He first started acting while in high school at the Buxton School, in Williamstown, Massachusetts. He graduated from Bennington College in 1993 with a B.A. in visual arts and drama.

Theroux made his film debut in 1996 in Mary Harron's I Shot Andy Warhol. Since then, he has performed both on Broadway, starring in Observe the Sons of Ulster Marching Towards the Somme; in numerous off-Broadway productions; and in comedy films such as Charlie's Angels: Full Throttle, The Baxter, Romy and Michelle's High School Reunion, Broken Hearts Club, and Zoolander.

He has also performed in more serious films such as American Psycho. He appeared in the film versions of the cult television shows Strangers With Candy and Michael Mann's Miami Vice. He starred in David Lynch's films Mulholland Drive and Inland Empire.

In 2003, he was featured in a music video for the British band Muse for their song "Hysteria". Theroux also has appeared on television, having starred in The District and appeared on episodes of shows such as Alias, Ally McBeal, Sex and the City (in which he guest starred in two episodes as different characters), and Six Feet Under (in which he played a recurring character in the third and fourth seasons).

In 2006, he directed his first film, Dedication, which premiered at the 2007 Sundance Film Festival. A fan of the band Deerhoof, Theroux chose them to score Dedication. Theroux also had roles in two other films at the festival, Broken English and The Ten, in which he played Jesus Christ alongside Gretchen Mol. Theroux co-wrote the Ben Stiller-directed Oscar-nominated film Tropic Thunder, and also appeared in the behind-the-scenes mockumentary Tropic Thunder: Rain of Madness.

In 2008, Theroux played John Hancock in the HBO miniseries John Adams. In 2009, Theroux made up part of the voice cast for Call of Duty: Modern Warfare 2. He also played Justin in Parks and Recreation. Theroux wrote the screenplay for the 2010 film Iron Man 2. Following Theroux's work on Tropic Thunder, actor Robert Downey, Jr. recommended Theroux as a screenwriter to the film's director, Jon Favreau.

Theroux returned to acting in the film Your Highness (2011), as Leezar, an evil wizard who kidnaps a princess. He starred in the 2012 comedy Wanderlust, playing the leader of a hippie commune. By August 2012, Theroux was hired to direct and rewrite the script for the comedy film Swear to God.

In June 2013, Theroux was cast as the lead character in HBO's TV pilot The Leftovers. which HBO ordered as a 10-episode season In September 2013. The series, which premiered June 29, 2014, is based on a book of the same name by Tom Perrotta, which follows a group of people left behind in the suburban community of Mapleton after mysterious disappearances worldwide.

Theroux co-wrote the sequel Zoolander 2 (2016), and reprised his role, Evil DJ, in the film.

Theroux was in a relationship with stylist Heidi Bivens for 14 years until 2011. Theroux began dating actress Jennifer Aniston in 2011, after working together on the film Wanderlust. They became engaged in August 2012, and wed on August 5, 2015.