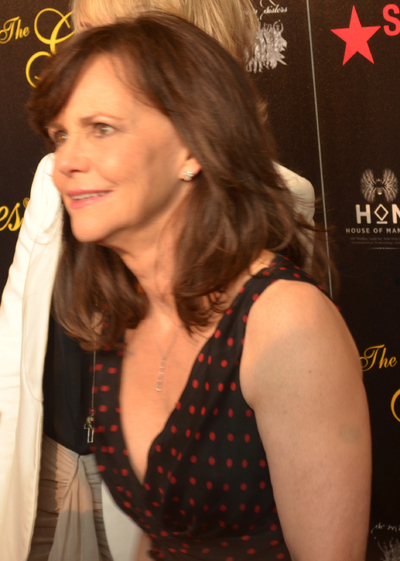 Field is a two-time winner of the Academy Award for Best Actress, for Norma Rae (1979) and Places in the Heart (1984). She has received three Emmy Awards for her title role in the TV film Sybil (1976), her guest role on ER (2000), and her role as Nora Holden Walker on ABC's series Brothers & Sisters (2007). She has also won two Golden Globes and the Screen Actors Guild Award for Best Actress, as well as the Best Female Performance Prize at the Cannes Film Festival for Norma Rae (1979). In 2012 Field's widely praised portrayal of Mary Todd Lincoln in Steven Spielberg's film Lincoln brought her Best Supporting Actress nominations for the Academy Award, the Golden Globe, and the BAFTA and Screen Actors Guild awards.

Sally Field was born in Pasadena, California. Her father, Richard Dryden Field, was an Army officer, and her mother Margaret Field (née Morlan) was an actress. Her parents divorced in 1950; her mother later married actor and stuntman Jock Mahoney.

Field got her start on television as the eponymous, boy-crazy surfer girl in the sitcom Gidget (1965–66). She went on to star as Sister Bertrille in The Flying Nun (1967–70). In an interview included on the DVD release of The Flying Nun, Field said she would have preferred to continue playing Gidget and hated being on The Flying Nun because she was not treated with respect by the show's directors. After her iconic Flying Nun role, she felt she became typecast. She later starred opposite John Davidson in the short-lived series The Girl with Something Extra (1973–74), playing a young woman trying to lead a normal life despite her telepathic abilities.

Field made her film debut with a small part in Moon Pilot (1962). Her first major film role was in The Way West (1967). In 1977 she costarred with Burt Reynolds, Jackie Gleason and Jerry Reed in that year's #2 grossing film, Smokey and the Bandit.

Field married Steven Craig in 1968. The couple had two sons: Peter Craig, a novelist, and Eli Craig, an actor and director. Craig and Field divorced in 1975. She married film producer Alan Greisman in 1984, and they had one son, Sam in 1987; Field and Greisman divorced in 1993.