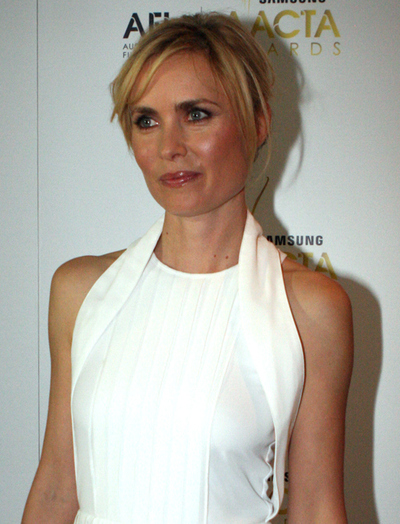 Mitchell was born in Melbourne. Her mother is a model turned designer, and her father is a filmmaker. She had a spiritually inclined upbringing, drawing from Hindu culture by her parents. Her first name, Radha, is of Hindu origin and is the name of the soulmate to Lord Krishna. The other parts of her name coming from an Indian origin are Rani ("Queen") and Ananda ("Bliss"). She attended the private St Michael's Grammar School.

Mitchell began her career starring on ABC TV's Sugar and Spice in 1988.  Progressing to Neighbours in 1994, Mitchell played two separate characters over her three-year stint on the show.

In 1997 she starred in two films, High Art and Everything Put Together, both Independent Spirit Award winners. Other films—including Pitch Black opposite Vin Diesel, Phone Booth opposite Colin Farrell, and Man on Fire opposite Denzel Washington—soon followed.

Mitchell gained recognition for her performance in the Academy Award–winning Finding Neverland, which co-starred Johnny Depp and Kate Winslet. This performance earned the cast a Screen Actors Guild Award nomination for Outstanding Cast in a Motion Picture.