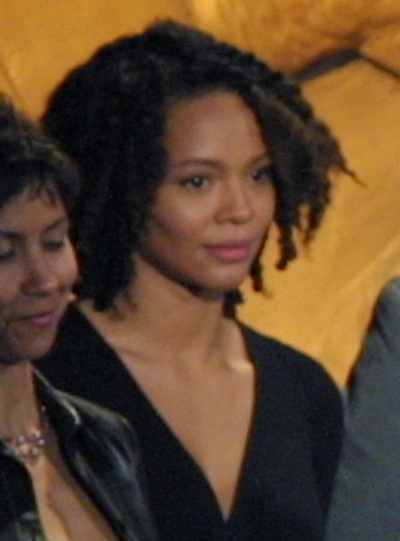 Ejogo has appeared as civil rights activist Coretta Scott King in two films: Boycott (2001) and Selma (2014). While preparing for the role in Boycott, she met with King and was given King's blessing for her portrayal. Carmen starred in the movie “Metro” with Eddie Murphy in 1997.

Ejogo was born on 22 October 1973 in Kensington, London, England. She is the daughter of a Scottish mother Elizabeth (née Douglas) and a Nigerian father Charles Ejogo. Ejogo remembers her mother as having been "a bit of a hippie" during her childhood. Her younger brother, an entrepreneur, is also named Charles Ejogo. She attended the Oratory Roman Catholic Primary School and Glendower Preparatory School, and was then educated at Godolphin and Latymer School.

Ejogo was briefly married to Trip-hop artist Tricky. In 2000, she married American actor Jeffrey Wright, whom she met while making the HBO film Boycott. They have a son (Elijah) and a daughter (Juno). Ejogo and Wright have since divorced.

Ejogo has been involved in the music industry, having collaborated with several artists since the 1990s. She presented The Carmen Ejogo Video Show, her own video show on BSB's Power Station channel.

She wrote and sang lead vocals on the song "Candles" by English drum 'n' bass DJ Alex Reece—she appeared in the music video and is listed in the production credits as "Carmen". Ejogo also sang vocals and duets with ex-husband Tricky on a song called "Slowly". She sang vocals for the film Love's Labour's Lost (2000).

Aside from "Candles", Ejogo appears on four songs of the Sparkle original soundtrack album from the movie of the same name, singing lead on "Yes I Do" (as a solo), and lead vocals with Jordin Sparks and Tika Sumpter singing backup on "Jump", "Hooked on Your Love" and "Something He Can Feel".