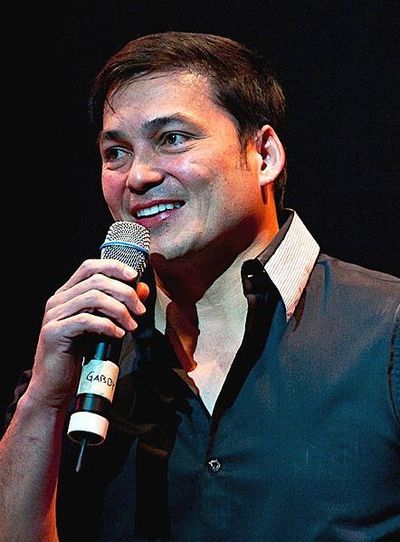 Gabby was born in San Juan, Metro Manila, Philippines to Rolando "Rollie" Concepcion (1936–2008) and Lourdes Arellano. He received the name "Gabby" because he talks too much. He is the great grandson of prominent Manila landmark architect Juan M. Arellano. Concepcion attended elementary school at Ateneo de Manila, high school at Aquinas School, and spent part of his college life at Centro Escolar University where he took up pre-dentistry course before he was discovered and entered showbiz.

Concepcion first appeared in a 1980 Close-up commercial and became famous as the "Close-up boy".[citation needed] Introduced into showbiz at the age of fifteen, he starred in the Regal Films production Katorse, which catapulted him to Matinee idol status.[citation needed] From 1980 – 1995, Gabby made 80 films with Regal, Viva, and GC (his own production company) and had several modeling and endorsement deals. He received several Showbiz awards, including Best actor (Urian), Best supporting actor (Urian, Star, and Famas), Mr. RP movies, and more.

Gabby took a hiatus from acting and moved to the United States in March 1995. Aside from already having an advertising degree from Maryknoll College (now Miriam College) in the Philippines, Concepcion later graduated from Lincoln University in Oakland, California, double majoring in Management Information Systems and International Business Administration. He subsequently became a purchasing agent with Fisher Industries, a division of GAP, then joined Prudential California Realty in Stockton, California in 2003.

He moved back to the Philippines in March 2008 to be with his father who later that year died of terminal heart disease. Concepcion made a comeback in Showbiz when he signed a contract with ABS-CBN in April 2008, first appearing in an episode of the television series Maalaala Mo Kaya. He then starred in Iisa Pa Lamang.

Gabby was married to co-star Sharon Cuneta from 1984-1987. Together they have a daughter, actress and model Kristina Cassandra Concepcion. He has two other daughters from his marriage to Jenny Syquia in the early 1990s. In 2004, Concepcion married long-time girlfriend Genevieve "Ginbee" Yatco Gonzales in California; they have two daughters.