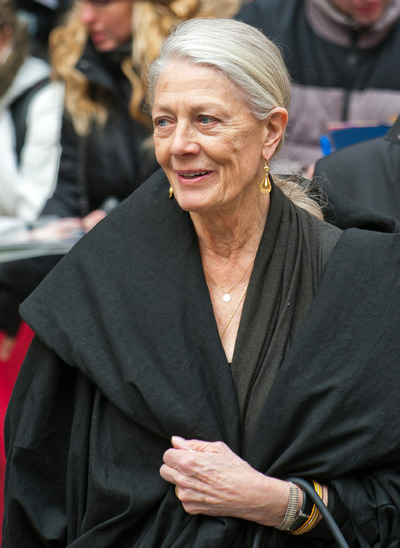 Vanessa Redgrave, CBE (born 30 January 1937) is an English actress of stage, screen and television, as well as a political activist.

Redgrave rose to prominence in 1961 playing Rosalind in As You Like It with the Royal Shakespeare Company and has since made more than 35 appearances on London's West End and Broadway, winning both the Tony and Olivier Awards. On screen, she has starred in more than 80 films; including Blowup (1966), Isadora (1968), Mary, Queen of Scots (1971), The Devils (1971), Julia (1977), The Bostonians (1984), Howards End (1992), Mission: Impossible (1996) and Atonement (2007). Redgrave was proclaimed by Arthur Miller and Tennessee Williams as "the greatest living actress of our times," and she remains the only British actress ever to win the Oscar, Emmy,Tony, Cannes, Golden Globe, and the Screen Actors Guild awards. She was also the recipient of the 2010 BAFTA Fellowship "in recognition of an outstanding and exceptional contribution to film."

Redgrave was born in Greenwich, London, the daughter of actors Sir Michael Redgrave and Rachel Kempson. Laurence Olivier announced her birth to the audience at a performance of Hamlet at the Old Vic, when he said that Laertes (played by Sir Michael) had a daughter. She was educated at the Alice Ottley School, Worcester & Queen's Gate School, London before "coming out" as a debutante. Her late siblings, Lynn Redgrave and Corin Redgrave, were also acclaimed actors.

Vanessa Redgrave entered the Central School of Speech and Drama in 1954. She first appeared in the West End, playing opposite her brother, in 1958.

In 1959 she appeared at the Shakespeare Memorial Theatre under the direction of Peter Hall as Helena in A Midsummer's Night Dream opposite Charles Laughton as Bottom and Coriolanus opposite Laurence Olivier (in the title role), Albert Finney and Edith Evans.

In 1960, Redgrave had her first starring role in Robert Bolt's The Tiger and the Horse, in which she co-starred with her father. In 1962 she played Imogen in William Gaskill's production of Cymbeline for the Royal Shakespeare Company. In 1966 Redgrave created the role of Jean Brodie in the Donald Albery production of The Prime of Miss Jean Brodie, adapted for the stage by Jay Presson Allen from the novel by Muriel Spark. She won four Evening Standard Awards for Best Actress in four decades. She was awarded the Laurence Olivier Award for Actress of the Year in a Revival in 1984 for The Aspern Papers.

Highlights of Redgrave's early film career include her first starring role in Morgan: A Suitable Case for Treatment (for which she earned an Oscar nomination, a Cannes award, a Golden Globe nomination and a BAFTA Film Award nomination); her portrayal of a cool London swinger in 1966's Blowup; her spirited portrayal of dancer Isadora Duncan in Isadora (for which she won a National Society of Film Critics' Award for Best Actress, a second Prize for the Best Female Performance at the Cannes Film Festival, along with a Golden Globe and Oscar nomination in 1969); and various portrayals of historical figures – ranging from Andromache in The Trojan Women, to Mary, Queen of Scots in the film of the same name. She also played the role of Guinevere in the film Camelot with Richard Harris and Franco Nero, and briefly as Sylvia Pankhurst in Oh! What a Lovely War.

Redgrave's daughters, Natasha Richardson (1963–2009) and Joely Richardson (b. 1965) from her 1962–67 marriage to film director Tony Richardson, also built respected acting careers. In 1967, the year she divorced her husband Tony Richardson, who left her for the French actress Jeanne Moreau, she became romantically involved with Italian actor Franco Nero when they met on the set of Camelot. In 1969, they had a son, Carlo Gabriel Redgrave Sparanero (known professionally as Carlo Gabriel Nero), a screenwriter and director. After separating for many years, during which they both had relationships with other people, they reunited and married on 31 December 2006. Carlo Nero directed Redgrave in the cinematic adaptation of Wallace Shawn's play The Fever.

From 1971 to 1986, she had a long-term relationship with actor Timothy Dalton, with whom she had starred in the film Mary, Queen of Scots.