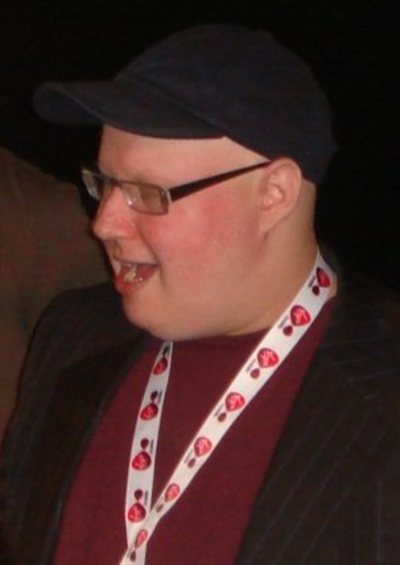 Matthew Richard "Matt" Lucas (born 5 March 1974) is an English comedian, screenwriter, actor and singer, best known for his work with David Walliams in the television show Little Britain, as well as for his portrayals of the scorekeeping baby George Dawes in the comedy panel game Shooting Stars and Tweedledee and Tweedledum in Alice in Wonderland.

In May 2007, he was placed seventh in the list of the UK's 100 most influential gay men and women by British newspaper The Independent.

Lucas was born in Paddington, London, the son of Diana (née Williams) and John Stanley Lucas (1944–1996), who ran a chauffeuring business. Some of Lucas's mother's family fled from Germany during the Second World War. Lucas grew up in a Reform Jewish household. He has had alopecia since his childhood, and lost all of his hair when he was six years old. Lucas's father died of a heart attack aged 52 in Brent, Greater London.

Lucas was educated at Aylward Primary School and The Haberdashers' Aske's Boys' School, an independent school in Borehamwood in Hertfordshire, the same school attended by comic actors David Baddiel and Sacha Baron Cohen. He studied at the University of Bristol between 1993 and 1995. He also spent time with the National Youth Theatre, where he first met future writing partner David Walliams.

Lucas's association with Vic Reeves and Bob Mortimer began in 1992. In 1995, Lucas appeared in The Smell of Reeves and Mortimer. He went on to star with them in Shooting Stars. He quickly rose to fame as George Dawes, the giant baby, who would deliver a string of meaningless gags (often in character) and insults before delivering the score, while sitting at and playing a drum kit, often dressed in an adult-sized romper suit. He also appeared on occasion as Marjorie Dawes, George's mother, who also appears in Little Britain.

He again appeared with Reeves & Mortimer in the BBC series Randall & Hopkirk, and Catterick in a variety of roles. In 1999, Lucas paired with David Walliams, with whom he had already worked in both Mash and Peas and Sir Bernard's Stately Homes, to create Rock Profile, a comedy show that spoofed famous musicians and musical personalities. It is notable for being one of their first comedic collaborations, which fuelled their inspiration to then create the well-known show Little Britain. Lucas has also written for actor Sacha Baron Cohen.

His music video appearances include the Damien Hirst-directed video for Blur's "Country House", "Jesusland" by Ben Folds in 2005, "I'm with Stupid" by the Pet Shop Boys and "Vindaloo" and "Naughty Christmas" by Fat Les.

Lucas ventured into the world of stage musicals in 2002, when he took a role in Boy George's musical Taboo at The Venue, London. He played the performance artist Leigh Bowery.

Little Britain is Lucas's most commercially successful work. Originally a radio show on BBC Radio 4, it later became a TV series. Among the many characters he plays in the series, which he writes and acts in along with David Walliams, are apparently "disabled" Andy Pipkin, teenage Bristol chav Vicky Pollard, homophobic homosexual Daffyd Thomas, and insensitive slimming club organiser Marjorie Dawes.

Lucas is a patron of the Karen Morris Memorial Trust, a UK charity for leukaemia patients and their families. In April 2004, he appeared on Celebrity Who Wants to Be a Millionaire? and won £62,500 for the charity.

Lucas is gay, and has said he first had an inkling as such at the age of seven. In December 2006, Lucas entered into a civil partnership with Kevin McGee, in a ceremony in Central London. In attendance were various celebrities, including Barbara Windsor, Neil Tennant, Elton John, and Courtney Love. Their civil partnership was dissolved through the High Court in 2008, ending what was a six-year relationship. Though raised Jewish, Lucas has described himself as a "huge atheist".