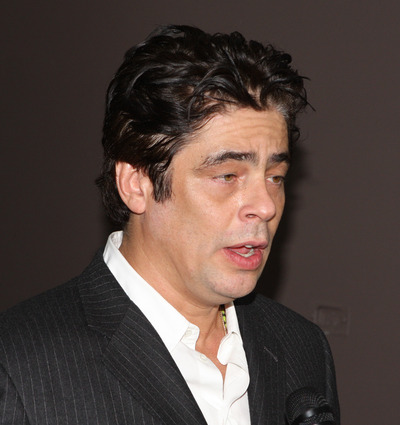 Benicio Monserrate Rafael del Toro Sánchez, better known as Benicio del Toro (born February 19, 1967) is a Puerto Rican-born Spanish actor andf ilm producer. He won an Academy Award, a Golden Globe Award, a Screen Actors Guild Award, and a BAFTA Award for his role as Javier Rodríguez inTraffic (2000). He is also known for his roles as Fred Fenster in The Usual Suspects (1995), Dr. Gonzo in Fear and Loathing in Las Vegas (1998), Franky Four Fingers in Snatch (2000), Jackie Boy in Sin City (2005), and Che Guevara in Che (2008), a performance which garnered him the Best Actor Award both at the Cannes Film Festival in France, and at the Goya Awards in Spain. He is the third Puerto Rican to win an Academy Award.

Benicio del Toro was born on February 19, 1967, in San German, Puerto Rico, to Gustavo Adolfo del Toro Bermudez and Fausta Genoveva Sanchez Rivera, who were both lawyers. Many of Del Toro's relatives are involved in Puerto Rico's legal system. He has an older brother, Gustavo, who was a pediatric oncologist at the Mount Sinai Medical Center in New York City. He had a Catalan paternal great-grandfather and a Basque maternal great-grandmother. He has some Italian and Indigenous American ancestry as well. Benicio del Toro is related to Puerto Rican basketball player Carlos Arroyo, Spanish pop-eurodance singer Rebeca Pous Del Toro, whose maternal grandfather was Puerto Rican, and Puerto Rican singer Eliseo del Toro.

Del Toro, whose childhood nicknames were "Skinny Benny" and "Beno", was raised a Roman Catholic and attended Academia del Perpetuo Socorro (The Academy of Our Lady of Perpetual Help), a Roman Catholic school in Miramar, Puerto Rico. When del Toro was nine years old, his mother died of hepatitis. At age 12, he moved with his father and brother to Mercersburg, Pennsylvania, where he was enrolled at the Mercersburg Academy. He spent his adolescence and attended high school there. After graduation, del Toro followed the advice of his father and pursued a degree in business at the University of California, San Diego. Success in an elective drama course encouraged him to drop out of college and study with noted acting teachers Stella Adler and Arthur Mendoza, in Los Angeles, as well as at the Circle in the Square Theatre School, in New York City.