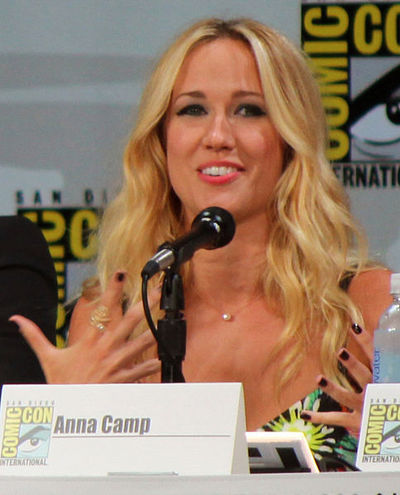 Anna Ragsdale Camp (born September 27, 1982) is an American actress. She is known for her role as Jill Mason in the 2008 Broadway revival of Equus and as Sarah Newlin in the second, sixth and seventh seasons of True Blood.

Camp was born in Aiken, South Carolina. Her mother, Dee (née Kornegay), is a Democratic Party volunteer, and her father, Thomas Sewell Camp, is a bank executive. She has an older sister, Saluda, also an actress. Camp grew up in Columbia, South Carolina. She attended Meadowfield Elementary School and was cast in a Drug Abuse Resistance Education production in the second grade, introducing her to acting. She graduated from the University of North Carolina School of the Arts with a Bachelor of Fine Arts degree in 2004. She moved to New York City shortly thereafter.

Camp played the role of Perfect in columbinus in 2005. She played Jill Mason in the 2008 Broadway revival of Equus at the Broadhurst Theatre, which starred Daniel Radcliffe as Alan Strang. Speaking about the role, Camp said, "I had a lot of thought; I didn't even know if I was going to do Equus because of the nudity and because of the high profile [aspect] of it. But you only live once and you have to take those risks because you'll only be a better person or actor because of it."

Anna appeared in Reinventing the Wheelers, a 2007 television pilot which was not ordered to series by ABC. In 2008 she had a role in the pilot of the ABC television dramedy Cashmere Mafia. She had a starring role as Sarah Newlin in the second season of the HBO supernatural drama series True Blood, which earned her a nomination for a SAG Award for Outstanding Performance by an Ensemble in a Drama Series; Camp had earlier auditioned for the role of Sookie Stackhouse.

In 2011, she starred in the premiere of All New People, a play written by Zach Braff and staged at Second Stage Theatre; the production was directed by Peter DuBois and also starred Justin Bartha, David Wilson Barnes and Krysten Ritter.

Camp had a starring role in the first season of Fox sitcom The Mindy Project, and played Aubrey Posen in the 2012 musical comedy film Pitch Perfect.

Camp was engaged to fellow actor Michael Mosley by September 2008; the couple wed in 2010 but filed for divorce in 2013. Divorce proceedings are ongoing as of December 2014. Camp is dating Pitch Perfect co-star Skylar Astin and she appeared in an episode of his series Ground Floor as an ex-girlfriend.