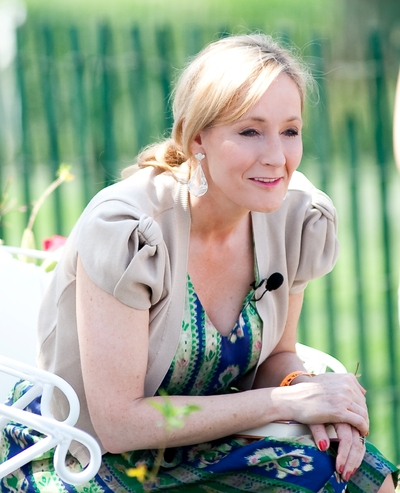 Joanne "Jo" Rowling, OBE FRSL (born 31 July 1965), pen name J. K. Rowling, is a British novelist, best known as the author of the Harry Potter fantasy series. The Potter books have gained worldwide attention, won multiple awards, and sold more than 400 million copies. They have become the best-selling book series in history, and been the basis for a series of films which has become the highest-grossing film series in history. Rowling had overall approval on the scripts as well as maintaining creative control by serving as a producer on the final installment.

Born in Yate, Gloucestershire, Rowling was working as a researcher and bilingual secretary for Amnesty International when she conceived the idea for the Harry Potter series on a delayed train from Manchester to London in 1990. The seven-year period that followed entailed the death of her mother, divorce from her first husband and poverty until Rowling finished the first novel in the series, Harry Potter and the Philosopher's Stone (1997). Rowling subsequently published 6 sequels- the last, Harry Potter and the Deathly Hallows (2007) - as well as 3 supplements to the series. In 2012, Rowling parted with her agency and resumed writing in the form of a tragicomedy novel aimed at adult readership, entitled The Casual Vacancy. Rowling has said she is currently working on two books - one aimed for adults, the other for children younger than the Harry Potter audience, and she expects the latter to be published first.

Rowling has led a "rags to riches" life story, in which she progressed from living on state benefits to multi-millionaire status within five years. She is the United Kingdom's best-selling author since records began, with sales in excess of £238m. The 2008 Sunday Times Rich List estimated Rowling's fortune at £560 million ($798 million), ranking her as the twelfth richest woman in the United Kingdom. Forbes ranked Rowling as the forty-eighth most powerful celebrity of 2007, and TIME magazine named her as a runner-up for its 2007 Person of the Year, noting the social, moral, and political inspiration she has given her fans. In October 2010, Rowling was named the "Most Influential Woman in Britain" by leading magazine editors. She has become a notable philanthropist, supporting such charities as Comic Relief, One Parent Families, Multiple Sclerosis Society of Great Britain and Lumos (formerly the Children's High Level Group).

Although she writes under the pen name "J. K. Rowling", pronounced like rolling, her name when her first Harry Potter book was published was simply "Joanne Rowling". Anticipating that the target audience of young boys might not want to read a book written by a woman, her publishers demanded that she use two initials, rather than her full name. As she had no middle name, she chose K as the second initial of her pen name, from her paternal grandmother Kathleen Ada Bulgen Rowling. She calls herself "Jo" and has said, "No one ever called me 'Joanne' when I was young, unless they were angry." Following her marriage, she has sometimes used the name Joanne Murray when conducting personal business.

Rowling was born to Peter James Rowling, a Rolls-Royce aircraft engineer, and Anne Rowling (née Volant), on 31 July 1965 in Yate, Gloucestershire, England, 10 miles (16 km) northeast of Bristol. Her mother Anne was half-French and half-Scottish. Her parents first met on a train departing from King's Cross Station bound for Arbroath in 1964. They married on 14 March 1965. Her mother's maternal grandfather, Dugald Campbell, was born in Lamlash on the Isle of Arran. Her mother's paternal grandfather, Louis Volant, was awarded the Croix de Guerre for exceptional bravery in defending the village of Courcelles-le-Comte during the First World War.

She attended St Michael's Primary School, a school founded by abolitionist William Wilberforce and education reformer Hannah More. Her headmaster at St Michael's, Alfred Dunn, has been suggested as the inspiration for the Harry Potter headmaster Albus Dumbledore.

In 1982, Rowling took the entrance exams for Oxford University but was not accepted and read for a BA in French and Classics at the University of Exeter, which she says was a "bit of a shock" as she "was expecting to be amongst lots of similar people - thinking radical thoughts." Once she made friends with "some like-minded people" she says she began to enjoy herself. Of her time at Exeter, Martin Sorrell, then a professor of French at the university, recalled "a quietly competent student, with a denim jacket and dark hair, who, in academic terms, gave the appearance of doing what was necessary." Although her own memory is of "doing no work whatsoever" and instead she "wore heavy eyeliner, listened to the Smiths, and read Dickens and Tolkien". After a year of study in Paris, Rowling graduated from Exeter in 1986 and moved to London to work as a researcher and bilingual secretary for Amnesty International.

In 1995, Rowling finished her manuscript for Harry Potter and the Philosopher's Stone on an old manual typewriter. Upon the enthusiastic response of Bryony Evens, a reader who had been asked to review the book's first three chapters, the Fulham-based Christopher Little Literary Agents agreed to represent Rowling in her quest for a publisher. The book was submitted to twelve publishing houses, all of which rejected the manuscript. A year later she was finally given the green light (and a £1500 advance) by editor Barry Cunningham from Bloomsbury, a publishing house in London. The decision to publish Rowling's book apparently owes much to Alice Newton, the eight-year-old daughter of Bloomsbury's chairman, who was given the first chapter to review by her father and immediately demanded the next. Although Bloomsbury agreed to publish the book, Cunningham says that he advised Rowling to get a day job, since she had little chance of making money in children's books. Soon after, in 1997, Rowling received an £8000 grant from the Scottish Arts Council to enable her to continue writing.

In June 1997, Bloomsbury published Philosopher's Stone with an initial print run of 1,000 copies, 500 of which were distributed to libraries. Today, such copies are valued between £16,000 and £25,000. Five months later, the book won its first award, a Nestlé Smarties Book Prize. In February, the novel won the prestigious British Book Award for Children's Book of the Year, and later, the Children's Book Award. In early 1998, an auction was held in the United States for the rights to publish the novel, and was won by Scholastic Inc., for $105,000. In Rowling's own words, she "nearly died" when she heard the news. In October 1998, Scholastic published Philosopher's Stone in the US under the title of Harry Potter and the Sorcerer's Stone: a change Rowling claims she now regrets and would have fought if she had been in a better position at the time.

In an interview with Oprah Winfrey, Rowling gave credit to her mother for the success of the series saying that "the books are what they are because she died...because I loved her and she died."

Harry Potter is now a global brand worth an estimated $15 billion, and the last four Harry Potter books have consecutively set records as the fastest-selling books in history. The series, totalling 4,195 pages, has been translated, in whole or in part, into 65 languages.