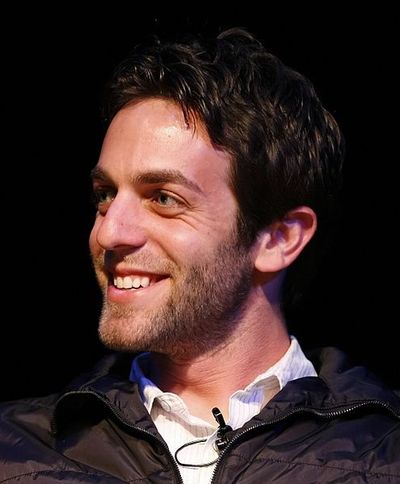 Benjamin Joseph Manaly Novak (born July 31, 1979), also known as B. J. Novak, is an American actor, stand-up comedian, screenwriter, author, and director. He is most widely known for being a writer and executive producer of The Office, in which he also played Ryan Howard.

Novak was born and raised in Newton, Massachusetts, the son of Linda (née Manaly) and author William Novak. Novak's family is Jewish. His father co-edited The Big Book of Jewish Humor, and has ghostwritten memoirs for Nancy Reagan, Lee Iacocca, Magic Johnson, and others; his parents also established a Jewish matchmaking service. Novak has two younger brothers, Jesse, a composer, and Lev. He attended Solomon Schechter Day School of Greater Boston for elementary school and middle school. He attended Newton South High School with future Office costar John Krasinski, and they graduated in 1997. Novak graduated from Harvard University, where he was a member of the Harvard Lampoon and the Hasty Pudding Club. He majored in English and Spanish literature, and wrote his honors thesis on the films of Shakespeare's Hamlet. Aside from the Lampoon, he occasionally staged and performed in a variety show called The B.J. Show with fellow Harvard student B. J. Averell.

Novak graduated from Harvard University in 2001. Afterward he moved to Los Angeles, California and began working in clubs as a comedian. His first live stand-up performance took place at the Hollywood Youth Hostel on October 10, 2001. He was named one of Variety's "Ten Comedians To Watch" in 2003.

Novak was a writer for the short-lived The WB sitcom Raising Dad. He performed on Comedy Central's Premium Blend and on Late Night with Conan O'Brien.

Novak's television acting career began on MTV's Punk'd. He was the lead accomplice to Ashton Kutcher on the show's second season in 2003, playing pranks on Hilary Duff, Rachael Leigh Cook, Usher, and Mýa.

After hearing Novak's opening joke at a comedy club, executive producer Greg Daniels decided he "wanted to do something with him": Novak was subsequently cast as Ryan Howard.

On July 21, 2010, news reports indicated Novak had signed a contract to remain with the show for its seventh and eighth seasons; under the new terms, he would be made an executive producer midway through Season 7 and direct two episodes of the show. In a June 2009 interview with The Philadelphia Inquirer, Novak spoke about sharing the success of The Office with his Newton South High School classmate John Krasinski:

Sometimes when this feels too good to be true, I think that if this were all a dream, that would be what should have tipped me off. I'd wake up saying, "I was in this incredible TV show and it was a big hit and the star was John Krasinski from high school. Isn't that weird?"

In addition to his television credits, Novak has appeared in the films Unaccompanied Minors, Reign Over Me, The Internship, Knocked Up, The Smurfs and Quentin Tarantino's Inglourious Basterds. He played composer Robert B. Sherman in Saving Mr. Banks (2013), and Alistair Smythe in The Amazing Spider-Man 2 (2014). He had a supporting role in the 2016 film The Founder, which features Michael Keaton in the biopic's leading role of Ray Kroc.

On April 11, 2013, publishing house Alfred A. Knopf announced it had signed a seven-figure, two-book deal with Novak, with the first book slated to be a fictional collection of Woody Allen-like stories.

On February 4, 2014 a book of 22 stories, One More Thing: Stories and Other Stories, was published and spent 6 weeks on the NYT Hardcover Fiction Bestsellers List. Novak also signed a deal with Penguin's children's books label and wrote the title The Book With No Pictures, which was released in September 2014 and has spent two full years and counting on the New York Times Picture Books list, with 34 of those weeks charting the book as the #1 seller in the country.

In May 2015, it was announced that Novak and Mindy Kaling had signed a book deal worth a reported $7.5 million to write about their long friendship and former relationship, though Kaling said in an interview that the book would "not be a tell-all."

Novak has a close friendship with Mindy Kaling, whom he met through writing for The Office. The two dated on and off while writing and acting on the show, sometimes mirroring the on-again, off-again nature of the relationship between their respective characters Ryan Howard and Kelly Kapoor. He served as a consulting producer for Season 1 of The Mindy Project, and has appeared on the show 4 times although his formal producing role ended after the first season at his request. His brother Jesse composes the music for The Mindy Project and BoJack Horseman. In mid-October 2015, an Apple iOS app that Novak co-created and developed with Dev Flaherty called the List App was released; the app has since been nominated for a Webby Award (losing in its category to Beme and Pocket) and in May 2016 became available as both an Android addition and a full website.