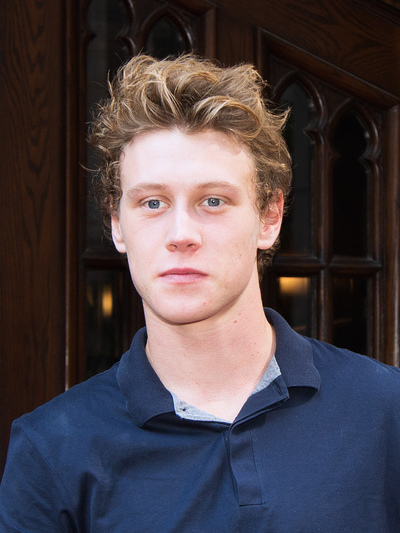 MacKay was born in London, the son of Kim Baker, a costume designer, and Paul MacKay, an Australian who works in lighting/stage management. At the age of 5 he produced, directed and created his own production of the play Peter and the Wolf with his friends playing the characters, and himself in the lead role of the Wolf so that he could swing from trees.

In 2002, MacKay was spotted whilst at The Harrodian School by an acting scout, who asked him if he would like to audition for a role in P.J. Hogan's 2003 film adaptation of Peter Pan. He attended a workshop, and won the role of one of the Lost Boys, Curly, in what was his big break. In 2005, at the age of 13, he won the role of Riccio in The Thief Lord, the film adaptation of Cornelia Funke's best-selling children's novel. He was also cast in the lead role in Johnny and the Bomb, a BBC three-part television drama adapted from Terry Pratchett's novel of the same name. He later applied unsuccessfully to both RADA and LAMDA.

McKay had some work in television, including roles in Rose and Maloney, Footprints in the Snow and The Brief.

In the 2008 film Defiance MacKay played Aron, the youngest of the four Bielski brothers, and in 2009 he played Harry in The Boys Are Back starring Clive Owen. He co-starred in the Marc Evans-directed musical film Hunky Dory opposite Minnie Driver, Aneurin Barnard and Kimberley Nixon, which is set in 1970s Swansea.

In 2012 he played the main character, Private Tommo Peaceful, in Private Peaceful and appeared in the inspirational film The Best of Men.

In 2013 MacKay played Eddie in How I Live Now opposite Saoirse Ronan and directed by Kevin Macdonald, and starred as Davy in the musical film Sunshine on Leith, featuring songs by The Proclaimers, directed by Dexter Fletcher.

In 2014 MacKay played the role of Joe, a 20-year-old struggling to come out in a homophobic Britain in 1984 in the film Pride (based on a true story) also starring Bill Nighy. In the film Joe finds friends in the form of a group called LGSM (Lesbians and Gays Support the Miners) and a small Welsh mining community finds some unlikely friends.

From 14 April – 23 May 2015 Mackay took the lead part as Richard Miller in Eugene O'Neill's coming-of-age play, Ah, Wilderness! directed by Natalie Abrahami at The Young Vic. Reviewing the play for The Daily Telegraph, Dominic Cavendish was unimpressed by the staging but wrote: "In misfit modern dress, George Mackay is an absolute delight as the callow boy-wonder, catching all the wide-eyed innocence and insecurity of youth, by turns arrogant, self-dramatising, vulnerable".

In July 2015, MacKay played the title role of Lewis Aldridge in the BBC's two-part television adaptation of Sadie Jones' debut novel The Outcast. In February 2016, he portrayed the part of Bill Turcott in the Hulu production of Stephen King's sci-fi/suspense thriller 11.22.63.

From 29 March – 14 May 2016 MacKay played the part of Mick in Harold Pinter's play The Caretaker directed by Matthew Warchus at The Old Vic Theatre in London opposite Timothy Spall and Daniel Mays.