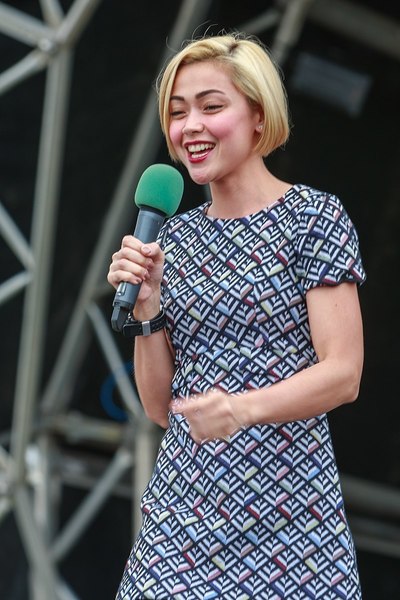 The youngest of two children, Sta. Maria and her brother was raised by their single mother. She was active in school curriculars - particularly the volleyball varsity team and debate team. She attended Philippine Pasay Chung Hua Academy and was an honor student. She married politician, Panfilo Lacson Jr., to whom she is now separated from. They had a son born in 2005.

Sta. Maria attended De La Salle University-Dasmariñas and studied Medical Biology as a precursor to Medicine. She left after a year due to the sudden success of her serial Be Careful With My Heart, which was extended from its intended run of 3 months to 2 1/2 years.

She has been a WHO Ambassador since 2011.

A talent scout approached Sta. Maria and her friends to audition for commercials while at a fast food chain. After numerous auditions and no offers, they gave up. A few weeks later, the talent scout approached Sta. Maria once again and encouraged her to audition for Star Magic. At 15, she was one of the youngest in their batch.

After starring and appearing in teen-oriented shows and movies such as Gimik, Flames, and Jologs, Sta. Maria landed a role in Tabing Ilog as the tomboyish Georgina. The show was successful and ran for four years.

She starred in the original version of Pangako Sa 'Yo as Lia Buenavista in 2000. In 2015, she starred in the remake as Amor Powers originally by Eula Valdez. She has received adulation for her portrayal.

After playing teen roles, she played in primetime shows such as Walang Kapalit and Kampanerang Kuba. She transitioned to star in numerous independent films, which have been screened internationally. She has since received 2 Gawad Urian Award nominations.

In 2010, she starred in Noah alongside Piolo Pascual, who has called her a 'thinking actress'. In 2011, she played Sophia in the critically acclaimed 100 Days to Heaven. In 2012, Jodi became her special participation as Young Olivia La Peña in the daytime drama series Mundo Man ay Magunaw until she rose up when she top-billed Be Careful With My Heart as Maya dela Rosa along with Richard Yap who played her love interest Richard Lim. The show became a success worldwide, spawning albums, worldwide tours, and concerts.