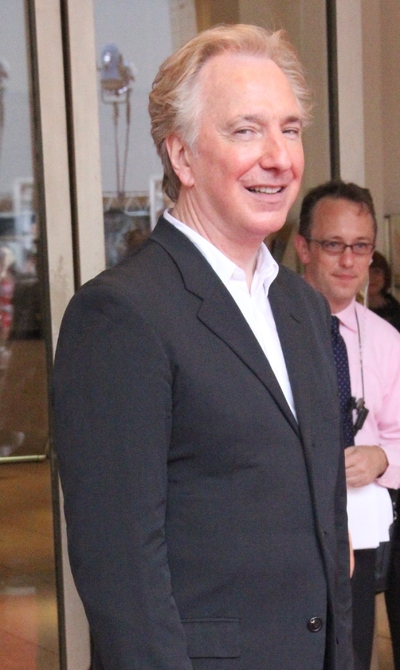 Alan Sidney Patrick Rickman (born 21 February 1946) is an English actor of stage and screen. He is a renowned stage actor in modern and classical productions and a former member of the Royal Shakespeare Company. His breakout performance was as the Vicomte de Valmont in Les Liaisons Dangereuses, for which he was nominated for a Tony Award. Rickman is known for his film performances as Hans Gruber in Die Hard, Sheriff Of Nottingham in Robin Hood: Prince of Thieves for which he won the BAFTA Award for Best Actor in a Supporting Role in 1991, Severus Snape in the Harry Potter film series,Éamon de Valera in Michael Collins, and Metatron in Dogma.

Rickman has also had a number of other notable film roles such as Jamie in Truly, Madly, Deeply, P.L. O'Hara in An Awfully Big Adventure and Colonel Brandon in Ang Lee's 1995 film Sense and Sensibility. More recently, he played Judge Turpin in the film adaptation of Stephen Sondheim's musical of Sweeney Todd: The Demon Barber of Fleet Street. In 1995, he was awarded the Golden Globe, Emmy Award and Screen Actors Guild Award for his portrayal of Rasputin in Rasputin: Dark Servant of Destiny. He has been named one of the best actors to have never received an Academy Award nomination in 2010.

As of 2013, Rickman has won a BAFTA Award, a Golden Globe Award, an Emmy Award and a Screen Actors Guild Award. He has been nominated twice for a Tony Award and several times for a BAFTA Award.

Rickman was born in South Hammersmith, London, to a working class family, the son of Margaret Doreen Rose (née Bartlett), a housewife, and Bernard Rickman, a factory worker. Rickman's mother was from Wales and a Methodist, and his father was of Irish Catholic background. He has one elder brother, David (b. 1944), a graphic designer, a younger brother, Michael (b. 1947), a tennis coach, and a younger sister, Sheila (b. 1949). Rickman attended Derwentwater Primary School, in Acton, a school that followed the Montessori method of education.

When he was eight, his father died, leaving his mother to bring up four children mostly alone. She married again, but divorced his stepfather after three years. "There was one love in her life," Rickman later said. Rickman excelled at calligraphy and watercolour painting, and from Derwentwater Junior School he won a scholarship to Latymer Upper School in London, where he started getting involved in drama. After leaving Latymer, Rickman attended Chelsea College of Art and Design and then the Royal College of Art. This education allowed him to work as a graphic designer for the radical newspaper the Notting Hill Herald, which he considered a more stable occupation than acting. "Drama school wasn't considered the sensible thing to do at 18," he said.

After graduation, Rickman and several friends opened a graphic design studio called Graphiti, but after three years of successful business, he decided that if he were to ever explore acting professionally, it was now or never. This led him to write a letter to the Royal Academy of Dramatic Art (RADA) requesting an audition and was awarded a place in RADA which he attended from 1972–74. While there, he studied Shakespeare's works and supported himself by working as a dresser for Nigel Hawthorne and Sir Ralph Richardson, and left after winning several prizes, including the Emile Littler Prize, the Forbes Robertson Prize, and the Bancroft Gold Medal.