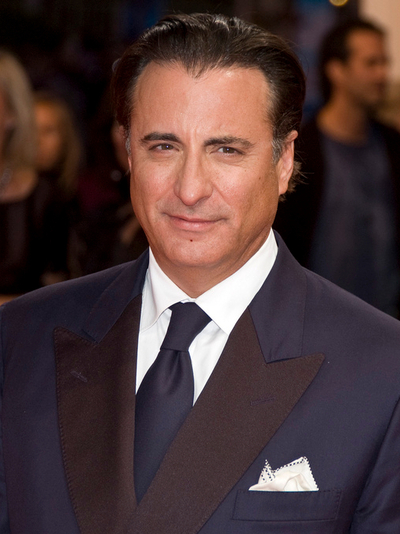 Andrés Arturo García Menéndez (born April 12, 1956), professionally known as Andy Garcia, is an American actor and director. He became known in the late 1980s and 1990s, having appeared in several successful Hollywood films, including The Godfather Part III, The Untouchables, Internal Affairs and When a Man Loves a Woman. More recently, he has starred in Ocean's Eleven and its sequels, Ocean's Twelve and Ocean's Thirteen, and The Lost City.

García was nominated for the Academy Award for Best Supporting Actor for his role as Vincent Manciniin The Godfather Part III.

García was born Andrés Arturo García Menéndez in Havana, Cuba. His mother, Amelie Menéndez, was an English teacher, and his father, René García Núñez, was an avocado farmer and attorney in Cuba, and later owned a fragrance business in the United States. When García was five years old, the family moved to Miami, Florida, after the failed Bay of Pigs Invasion. Over a period of several years, they built up a million-dollar perfume company.  During his last year in high school, he became ill with mononucleosis, which convinced him to pursue a career in acting. He began his acting career taking a drama class with Jay W. Jensen in his senior year at Miami Beach Senior High School. He graduated from Florida International University in Miami.

García began acting at Florida International Universitybut soon went to Hollywood. He had a short role in the first episode of "Murder, She Wrote" as "1st white tough" in 1984. He played the role of a gang member in the first episode of the popular TV series Hill Street Blues. He appeared in a supporting role in 1985's The Mean Season alongside Kurt Russell. Director Brian De Palma engaged him for The Untouchables (1987).

In 1989, Garcia did the Ridley Scott film Black Rain with Michael Douglas. Also in 1989, Francis Ford Coppola was casting The Godfather Part III. García won the part of Vincent Mancini, the illegitimate son of Sonny Corleone, and earned an Academy Award nomination as Best Supporting Actor for his performance.