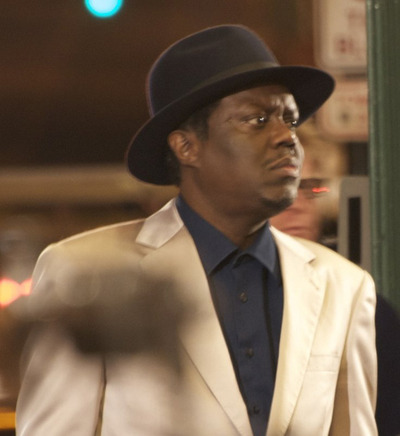 Bernard Jeffrey "Bernie" McCullough (October 5, 1957 – August 9, 2008), better known by his stage name Bernie Mac, was an American stand-up comedian, actor, voice artist, and comedian at the All Jokes Aside comedy club in Chicago. Born and raised on the South Side of Chicago, Mac gained popularity as a stand-up comedian. He joined comedians Steve Harvey, Cedric the Entertainer, and D. L. Hughley as The Original Kings of Comedy.

After briefly hosting the HBO show Midnight Mac, Mac appeared in several films in smaller roles. His most noted film role was as Frank Catton in the remake Ocean's Eleven and the titular character of Mr. 3000. He was the star of The Bernie Mac Show, which ran from 2001 through 2006, earning him two Emmy Award nominations for Outstanding Lead Actor in a Comedy Series. His other films included starring roles in Booty Call, Friday, The Players Club, Head of State, Charlie's Angels: Full Throttle, Bad Santa, Guess Who, Pride,Soul Men, Transformers and Madagascar: Escape 2 Africa.

Mac suffered from sarcoidosis, a disease in which abnormal collections of chronic inflammatory cells (granulomas) form as nodules in multiple organs, particularly the lungs and lymph nodes. Lung scarring or infection may lead to respiratory failure and death. Mac had said the condition was in remission in 2005. His death on August 9, 2008 was caused by complications from pneumonia.

Bernie Mac was born and raised in Chicago, Illinois, on the city's South Side by his single mother, Mary, who died of cancer when he was 16 years old in his sophomore year of high school.

He put on shows for neighborhood kids on the South Side. He attended Chicago Vocational Career Academy where Dick Butkus also earlier attended. Later, he moved to Tampa, Florida. During his 20s, he worked in a variety of jobs, including furniture mover and a UPS agent.

Bernie Mac's influences were from The Three Stooges and listening to stand-up comedians Richard Pryor and Redd Foxx. Mac started as a stand-up comedian in Chicago's Cotton Club. After he won the Miller Lite Comedy Search at the age of 32, his popularity as a comedian began to grow. A performance on HBO's Def Comedy Jam thrust him into the spotlight.