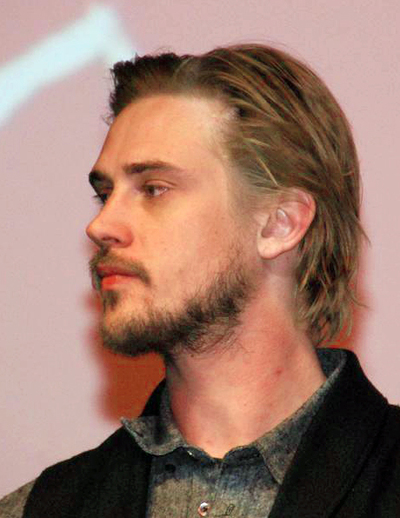 Robert Boyd Holbrook (born circa 1981) is an American actor and fashion model. He has appeared in films such as Milk, Out of the Furnace, Run All Night, A Walk Among the Tombstones, and Gone Girl, and stars as DEA Agent Steve Murphy in the Netflix series Narcos. In 2012, he starred in the series Hatfields & McCoys (miniseries) as "Cap" Hatfield, and in 2017, he portrayed villain Donald Pierce in Logan.

Holbrook was born in Prestonsburg, Kentucky, the son of Ellen and Don Holbrook.

Holbrook was discovered while working part-time as a carpenter for Jenny Wiley Theatre in Kentucky. He signed with Elite Models in 2001. He has worked for other agencies such as Wilhelmina Models. Holbrook has been a model for such designers and labels as Gucci, Jean Paul Gaultier, Versus, Hugo Boss, Bill Blass, Calvin Klein, Moschino, Marc Jacobs, DSquared².

Holbrook and model Omahyra Mota were the subjects of photographer Ellen Von Unwerth Paris gallery exhibition "Omahyra & Boyd" and the 2005 book of that title from Exhibitions International (ISBN 2-914171-20-X).

He released a short series of poems through the website Model-Max.com, accompanied by illustrations by Jamie Strachan.

His prior acting work includes a role in the "Allison" music video for Permanent Me alongside model Tiah Eckhardt.

Holbrook is also a photographer who has done work for David Armstrong. He is also a sculptor, and exhibited his work in his first art show, "Iscariot", at the Rare gallery in Chelsea, New York from April 19 to May 17, 2008.

In 2017, Holbrook played Donald Pierce, the antagonist in Logan, the sequel to The Wolverine.