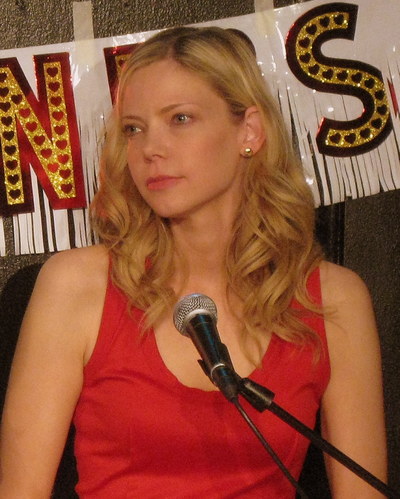 Erika "Riki" Lindhome (born March 5, 1979) is an American actress, comedian and musician. She is best known for television roles in shows including Gilmore Girls, House, The Big Bang Theory and United States of Tara and, with Kate Micucci, formed the musical comedy duo Garfunkel and Oates. She hosts the Nerdist podcast Making It.

Riki Lindhome was born in Coudersport, Pennsylvania in 1979, and grew up in Portville, New York. She is of Swedish heritage. Lindhome studied at Syracuse University and was part of the sketch comedy group "Syracuse Live". After graduating in 2000, Lindhome embarked on an acting career and without an agent was able to land a small role on the sitcom Titus and a minor role in the popular television series Buffy the Vampire Slayer.

In 2003 Lindhome got her first big break, earning a spot in Tim Robbins's Actor's Gang theater group and appearing in the play Embedded. She was one of four actors from the play to then be cast in the Academy Award-winning film Million Dollar Baby, where she played Mardell Fitzgerald, the sister of main character Maggie Fitzgerald played by Hilary Swank.

In 2005 Lindhome played a recurring role on Gilmore Girls as Juliet, a classmate of Rory's (Alexis Bledel), and in 2006 wrote, produced and co-directed an award-winning short film called Life is Short which starred herself, Alexis Bledel, Samm Levine, and Seth MacFarlane. Lindhome also appeared in the 2006 film Pulse and in 2007 was one of many actresses to appear in the music video for Nickelback's "Rockstar". She also appeared in advertisements for McDonalds McGriddles, Saturn and Domino's Pizza.