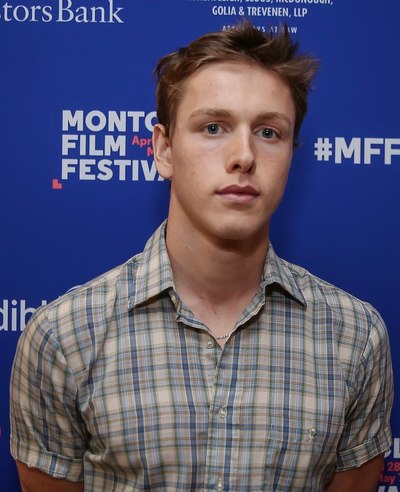 Harris Dickinson (born 24 June 1996) is an English actor, writer, and director. He is known for his portrayal of Frankie in the 2017 film Beach Rats, for which he was nominated for Independent Spirit Award for Best Male Lead, London Film Critics Circle Award for Young British/Irish Performer of the Year, and for the Gotham Independent Film Award for Breakthrough Actor. In 2018, Dickinson portrayed kidnapped heir John Paul Getty III in the first season of the Danny Boyle-helmed FX drama series Trust. He will appear in the upcoming films The Darkest Minds (2018) and Maleficent II (2020).

Dickinson was born and raised in Leytonstone, East London. At seventeen, he dropped out of school, where he was trying to study film and theatre. Dickinson almost opted for a career in the Marines, before being convinced to return to the theatre by his coach at RAW Academy in London. Dickinson commented that a lot of people choose not to follow their passions "because they're scared, or don't have the support network."

In 2016, Dickinson was cast as Frankie in Eliza Hittman's film Beach Rats, about a young man struggling with his sexuality against the Coney Island boardwalk. For his performance, Dickinson was nominated for the Independent Spirit Award for Best Male Lead and the Gotham Independent Film Award for Breakthrough Actor.

Harris Dickinson plays the role of Carl in Triangle of Sadness.