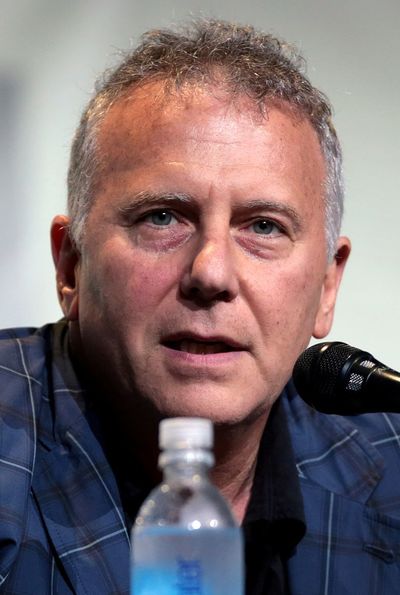 Paul Reiser (born March 30, 1956) is an American comedian, actor, writer, and musician. He is best known for his roles as Michael Taylor in the 1980s sitcom My Two Dads, Paul Buchman in the 1990s TV sitcom Mad About You, Carter Burke in the 1986 film Aliens, and more recently as Doug Getty in the Amazon TV series Red Oaks.

Reiser is ranked 77th on Comedy Central's 2004 list of the "100 Greatest Stand-ups of All Time". The name of Reiser's production company, Nuance Productions, is inspired by one of his lines in the film Diner (1982), in which his character explains his discomfort with the word "nuance".

Reiser was born in New York City in 1956, the son of Helen (born 1919), a homemaker, and Sam Reiser, a wholesale health food distributor. His family is of Romanian-Jewish descent; he has three sisters. Reiser attended the East Side Hebrew Institute and graduated from Stuyvesant High School. He earned his bachelor's degree at Binghamton University, where he majored in music (piano, composition).

During his university years, Reiser was active in student theater productions at the Hinman Little Theater, an on-campus community theater organization located in Hinman College, Reiser's dorm community. It was later renamed the Hinman Production Company. He found his calling as a comedian while performing in New York clubs during university summer breaks.

After developing his skills as a stand-up comedian, Reiser had a breakout film role in 1982 when he appeared in Diner, a coming-of-age film directed by Barry Levinson. Reiser's character, Modell, a closet stand-up comedian, effectively brought Reiser's abilities to the attention of Hollywood. He followed this success by playing a detective in Beverly Hills Cop (1984), a role he reprised in its sequel, Beverly Hills Cop II (1987). Reiser also had roles in James Cameron's Aliens (1986), in which he played the corrupt Carter Burke; The Marrying Man (1991) and Bye Bye Love (1995).

Reiser starred as one of two possible fathers of a teenage girl in the TV sitcom My Two Dads (1987–90), and later came to prominence in North America as Paul Buchman in Mad About You (1992–99), a comedy series he co-created, in which Helen Hunt co-starred as his on-screen wife. He was also the co-composer of the show's theme song, "The Final Frontier" (with Don Was), and performed the piano for the theme's recording. Reiser's role in Mad About You earned him nominations for an Emmy, a Golden Globe, an American Comedy Award and a Screen Actors Guild Award. For the show's final season, Reiser and Hunt received $1 million ($1.5 million today) per episode.

In 2001, Reiser played a dramatic role as a man desperate to locate his biological mother, after learning he has a serious illness, in the British TV film My Beautiful Son. In 2002, Reiser made a guest appearance as himself on Larry David's HBO sitcom, Curb Your Enthusiasm. In the TV comedy film Atlanta (2007), Reiser appears as one half of a couple who, after meeting at a funeral, are unable to stay away from each other. In 2010, Reiser collaborated with the singer Julia Fordham to create a CD album titled Unusual Suspects, which includes the song "UnSung Hero", dedicated to American soldiers serving in Afghanistan. The two embarked on an acoustic tour after its release. Reiser also co-wrote the song, "No There There" with Melissa Manchester for her 2015 album, You Gotta Love the Life. Early in his career, Reiser was the opening act for Manchester, she warned him that music audiences can be rough on comedians and that the last comedian that opened for her, left the stage in tears. Reiser reflects about this warning and on how he then bombed at the Concord Hotel. The story is detailed the chapter, "Don't Worry if They Suck", by Paul Reiser, in I Killed: True Stories of the Road from America's Top Comics (2010), By Ritch Shydner, Mark Schiff.

Reiser scripted and starred in the semi-autobiographical comedy series The Paul Reiser Show, which aired on NBC as a mid-season replacement during the 2010–11 TV season. "This is nice", commented Reiser on the Stephanie Miller radio program, "because you get to sit around and root for other shows to fail." However, due to the lack of lead time and promotion by NBC prior to its debut (as well as poor scheduling), the low-rated show was canceled on April 22, 2011, with only two episodes aired. He co-created (but did not star in) the 2017 dramedy There's... Johnny!, set backstage at The Tonight Show with Johnny Carson in 1972. Originally created for Seeso, the seven-episode season was released on Hulu after Seeso's collapse.

Reiser has written three books: Couplehood, about the ups and downs of being in a committed relationship; Babyhood, about his experiences as a first-time father; and Familyhood (released in May 2011), a collection of humorous essays. Couplehood is unique in that it starts on page 145; Reiser explained this as his method of giving the reader a false sense of accomplishment. In 1996, Reiser appeared on Late Show with David Letterman in the middle of writing Babyhood. Since he had not yet decided on a title, he presented a prop book, titled simply "Book" and with the same cover as that of Couplehood.