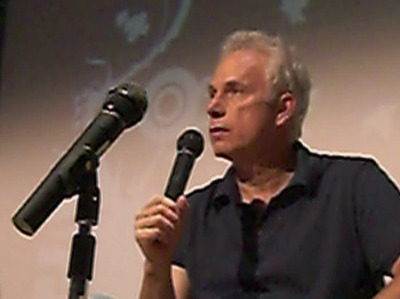 Christopher Haden-Guest, 5th Baron Haden-Guest (born February 5, 1948), better known as Christopher Guest, is an English screenwriter, composer, musician, director, actor, and comedian who holds dual British and American citizenship. He is most widely known in Hollywood for having written, directed and starred in several improvisational "mockumentary" films that feature a repertory-like ensemble cast. This series of work began with the film This Is Spinal Tap, where his character introduces the phrase, "These go to eleven" and continued with Best In Show,A Mighty Wind, Waiting for Guffman, and For Your Consideration. Guest also had a prominent role as the evil, six-fingered Count Rugen in the film The Princess Bride.

He holds a hereditary British peerage as the The 5th Baron Haden-Guest, and has publicly expressed a desire to see the House of Lords reformed as a democratically elected chamber. Though he was initially active in the Lords, his career there was cut short by the House of Lords Act 1999. When using his title, he is normally styled as Lord Haden-Guest. Guest is married to the actress and author Jamie Lee Curtis.

Guest was born in New York City, the son of Peter Haden-Guest, a BritishUnited Nations diplomat who later became The 4th Baron Haden-Guest, and his second wife, Jean Pauline Hindes, a former vice president of casting at CBS. Guest's paternal grandfather, Leslie, Baron Haden-Guest, was aLabour Party politician who was a convert to Judaism, and Guest's paternal grandmother's father was Colonel Albert Goldsmid, a British officer who founded the Jewish Lads' and Girls' Brigade and the Maccabaeans. Guest's maternal grandparents were Jewish immigrants from Russia. Both of Guest's parents had become atheists, and Guest had no religious upbringing. Nearly a decade before he was born, his uncle, David Guest, a lecturer and Communist Party member, was killed in the Spanish Civil War fighting in the International Brigades.

Guest spent parts of his childhood in his father's native United Kingdom. He attended The High School of Music & Art (New York City), studying classical music (clarinet). He later took up the mandolin, became interested in country music, and played guitar with Arlo Guthrie. Guest later began performing with bluegrass bands until he took up rock and roll.

Guest studied acting at New York University's Graduate Acting Program at the Tisch School of the Arts, graduating in 1971.