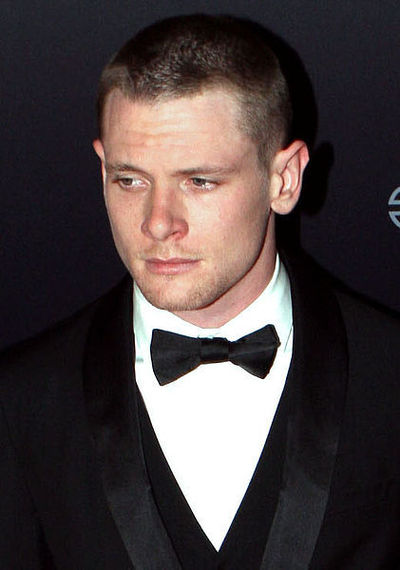 Jack O'Connell (born 1 August 1990) is an English actor. He is best known for playing Pukey Nicholls in This Is England (2006), Marky in Harry Brown (2009), James Cook in the E4 teen drama Skins, Eric in Starred Up (2014), and for starring as Louis Zamperini in the Angelina Jolie-directed war drama Unbroken (2014).

O'Connell was born in Alvaston, Derby, the son of Alison J. (née Gutteridge), who worked for British Midland, and John Patrick O'Connell, who worked on the railways for Bombardier. His father was Irish (from Kerry) and his mother is English. His maternal grandfather, Ken Gutteridge, was a professional football player and manager. He attended Saint Benedict Catholic School. He left school at sixteen with two GCSEs: a B in drama and C in English.

O'Connell made his professional acting debut in 2005 appearing in an episode of the British soap opera Doctors, along with four episodes as character Ross Trecot in The Bill. In 2006, O'Connell made his film debut in This Is England, a story about a boy growing up in 1980s England. During 2007, O'Connell made several minor television appearances in Waterloo Road, Holby City, and Wire in the Blood. He would go on to star in the play Scarborough, performed at the Edinburgh Festival, a role he reprised the following year upon its transfer to the Royal Court Theatre, London. In October of that same year, O'Connell starred in an educational DVD, Between You and Me, produced by Derbyshire Constabulary, in which his character Alfie Gilchrist encounters a range of issues including underage drinking, fake ID, peer pressure, and car theft. Youth Work Now magazine described his performance as "outstanding".