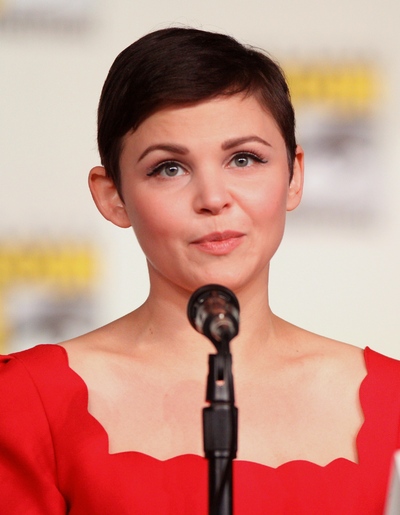 Jennifer Michelle Goodwin (born May 22, 1978), known professionally as Ginnifer Goodwin, is an American television and film actress. She is best known for her role as Margene Heffman on Big Love, and for her roles in films like Mona Lisa Smile, Something Borrowed, and He's Just Not That Into You. She currently has a lead role as Mary Margaret Blanchard/Snow White in the ABC series Once Upon a Time.

Goodwin was born in Memphis, Tennessee, to Tim Goodwin, who formerly owned and operated a recording studio, and his wife, Linda née Kantor, a former educator and "stay-at-home mom" who later worked for FedEx and Apple. Goodwin changed her name from "Jennifer" to "Ginnifer" to distinguish her name, and to assist in pronunciation of her name in her regional dialect. Her younger sister, Melissa Goodwin, is a stop motion animator on shows such as the Emmy Award-winning Robot Chicken, on which Ginnifer has also appeared as voice talent.

In her youth, Goodwin was affiliated with the North American Federation of Temple Youth, and was active in BBYO at the Jewish Community Center in Memphis; she had a bat mitzvah. After graduating from Lausanne Collegiate School in 1996, Goodwin attended Hanover College (majoring in Theatre) for one year before moving on to earn her Bachelor of Fine Arts from Boston University. While a student at BU, she performed in numerous student short films, as well as several college and local stage productions. Goodwin was given the Excellence in Acting: Professional Promise Award by the Bette Davis Foundation and graduated with honors. After her time at Boston University, she studied in England at Stratford Upon-Avon’sShakespeare Institute, in conjunction with the Royal Shakespeare Company. The following year she earned an Acting Shakespeare Certificate at London’s Royal Academy of Dramatic Art.