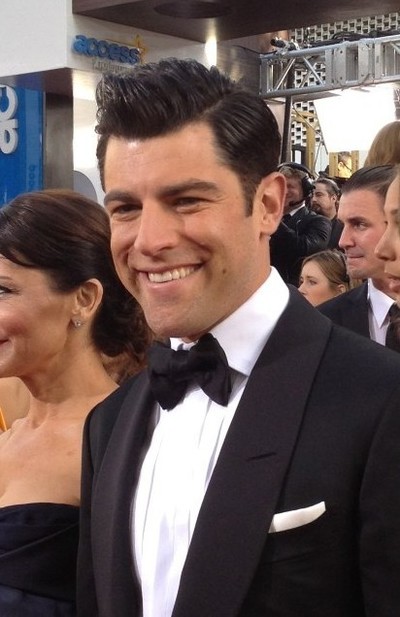 Max Greenfield (born September 4, 1979) is an American actor. He appeared in recurring roles in Veronica Mars and Ugly Betty, and co-starred in the WB series Modern Men. He co-stars as Schmidt in the Fox sitcom New Girl, for which he received Emmy, Critics' Choice Television, and Golden Globe awards nominations.

Greenfield began pursuing his acting career in 1998 after he graduated from high school. He landed guest stints on dramas such as Boston Public, Gilmore Girls and The O.C. Greenfield scored his first lead role on the short-lived series Modern Men as one of three bachelors who hire a life coach to help them understand and manage women. Greenfield had more success in supporting roles on Veronica Mars (reprising the role in the film adaptation in 2014) and Greek. In 2007 he landed a recurring role on Ugly Betty. He continued his television career with a slew of guest-starring roles on primetime series such as The CW's remake of Melrose Place, the short-lived No Ordinary Family, and Castle.

He created, produced, and starred in the comedy series The Gentlemen's League for the Audience Network in 2010, which followed the real-life fantasy football league he ran with actor Jerry Ferrara. As for film, Greenfield had his feature film debut in the film Cross Bronx. Greenfield had a featured role in When Do We Eat?, as an Internet tycoon who, after losing his fortune, becomes a Hasidic Jew. In 2011, Greenfield began playing the role of Schmidt in the sitcom New Girl. The role earned him nominations for both a Primetime Emmy Award for Outstanding Supporting Actor in a Comedy Series and a Golden Globe Award for Best Supporting Actor – Series, Miniseries or Television Film.

In 2015, Greenfield starred in a series of McDonald's commercials promoting their Sirloin Third Pound Burgers.

Greenfield was born and raised in Dobbs Ferry, New York. He is Jewish and had a Saturday Night Live-themed Bar Mitzvah. As of 2011, he lives in Los Angeles, California with his wife, Tess Sanchez, who is a casting director. The couple have two children, daughter Lily and son Ozzie.