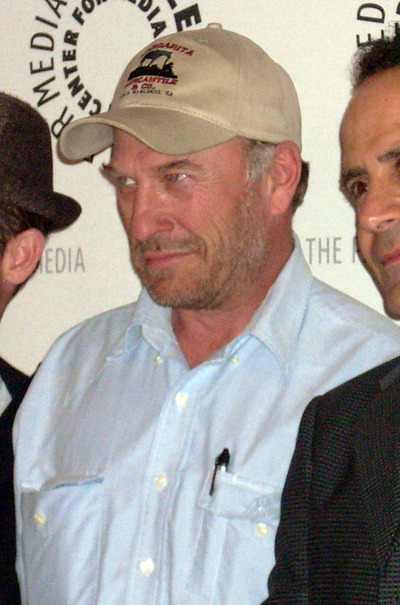 Frank Theodore “Ted” Levine (born May 29, 1957) is an American actor. He is known for his roles as Buffalo Bill in The Silence of the Lambs and as Captain Leland Stottlemeyer in the television series Monk.

Levine was born in Bellaire, Ohio, to Milton and Charlotte Levine, who were both doctors and members of Physicians for Social Responsibility. Levine is of Russian-Jewish and Welsh heritage and has described himself as a "hillbilly Jew". He grew up in Oak Park, Illinois. In 1975, he enrolled at Marlboro College. He became a fixture in the Chicago theatre scene and joined the Remains Theatre which was co-founded by Gary Cole and William Petersen. After his stage experience, Levine began to devote most of his energy during the 1980s toward finding roles in film and television.

After his breakout role in The Silence of the Lambs (as primary antagonist Buffalo Bill), there was a period where he was typecast in villainous roles. Levine was able to remedy this by playing more positive characters, such as a member of Al Pacino's police unit in Heat, astronaut Alan Shepard in the HBO mini-series From the Earth to the Moon, and Paul Walker's police superior Sergeant Tanner in The Fast and the Furious. In the drama Georgia, he played Mare Winningham's husband, one of his most sympathetic roles. His résumé also includes an uncredited role as the voice of the sociopathic trucker "Rusty Nail" in 2001's Joy Ride, and his performance as Detective Sam Nico in the 2003 film Wonderland, based on the gruesome murders in the Hollywood Hills. From 2002 to 2009, he co-starred as Captain Leland Stottlemeyer on USA Network's detective series Monk, starring Tony Shalhoub.

Levine provided the voice of the supervillain Sinestro in Superman: The Animated Series, Static Shock, Justice League, and Justice League Unlimited. Levine also appeared as a patriarch whose family takes a turn for the worse in the remake of The Hills Have Eyes (2006). In 2007, he portrayed local Sheriff James Timberlake in The Assassination of Jesse James by the Coward Robert Ford and appeared in Ridley Scott's American Gangster, alongside Denzel Washington and Russell Crowe. In 2010, he appeared as the warden of the island prison in Shutter Island, starring Leonardo DiCaprio. In 2012, he appeared as Sheriff Bloom Towne in Deep Dark Canyon, alongside Spencer Treat Clark and Nick Eversman, who portray Sheriff Towne's sons, Nate and Skylar, respectively. In 2013, he had a major supporting role in the FX murder mystery series The Bridge as Lieutenant Hank Wade, commander of a police homicide unit in a Texas border city. In 2014 portrayed General Underwood in the british-finish action film Big Game.