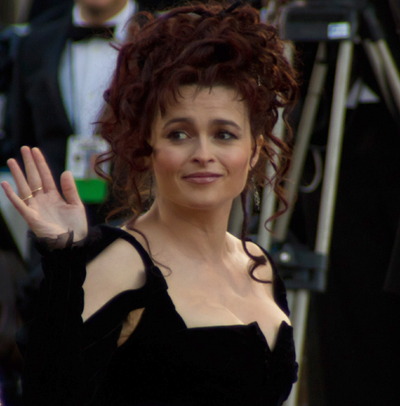 Helena Bonham Carter, CBE (born 26 May 1966) is an English actress. She made her acting debut in a television adaptation of K. M. Peyton's A Pattern of Roses before winning her first film role as the titular character in Lady Jane. She is known for her roles in films such as A Room with a View, Fight Club, The King's Speech, and playing the villainess Bellatrix Lestrange in the Harry Potter series, as well as for frequently collaborating with her domestic partner, director Tim Burton, in films such as Planet of the Apes, Big Fish, Corpse Bride, Charlie and the Chocolate Factory, Sweeney Todd: The Demon Barber of Fleet Street, Alice in Wonderland, and Dark Shadows. In 2012, she played Miss Havisham in Great Expectations, and Madame Thénardier in Les Misérables.

A two-time Academy Award nominee for her performances in The Wings of the Dove and The King's Speech, Bonham Carter's acting has been further recognised with six Golden Globe nominations, an International Emmy Award, a BAFTA Award, and a Screen Actors Guild Award. She was made a Commander of the Order of the British Empire (CBE) in the 2012 New Year honours list for services to drama, and received the honour from the Queen at Buckingham Palace on 22 February 2012.

Bonham Carter was born in Golders Green, London. Her mother, Elena (née Propper de Callejón), is a psychotherapist. Her father, Raymond Bonham Carter, who came from a prominent British political family, was a merchant banker and served as the alternative British director representing the Bank of England at the International Monetary Fund in Washington, D.C. during the 1960s.

Bonham Carter has two brothers, Edward and Thomas. She was educated at South Hampstead High School, an independent girls' school in Hampstead, London, and completed her A Levels at Westminster School, a public school in Westminster. Bonham Carter was denied admission to King's College, Cambridge, not because of her academic performance but because school officials were afraid that she would leave during the course to pursue her acting career.

When Bonham Carter was five, her mother had a serious nervous breakdown, from which it took her three years to recover. Upon her recovery, her experience in therapy led her to become a psychotherapist herself – Bonham Carter now pays her to read her scripts and deliver her opinion of the characters' psychological motivations. Five years after her mother's recovery, her father was diagnosed with acoustic neuroma. He suffered complications during an operation to remove the tumour which led to a stroke that left him half-paralysed and using a wheelchair. With her two older brothers at college, Bonham Carter was left to help her mother cope. She would later study her father's movements and mannerisms for her role in The Theory of Flight, before his death in January 2004.

Bonham Carter, who has no formal acting training, entered the field winning a national writing contest (1979) and used the money to pay for her entry into the actors' Spotlight directory. She made her professional acting début at the age of 16 in a television commercial. She also had a part in a minor TV film, A Pattern of Roses.

Her first lead film role was as Lady Jane Grey in Lady Jane (1986), which was given mixed reviews by critics. Her breakthrough role was Lucy Honeychurch in A Room with a View, which was filmed after Lady Jane, but released beforehand. Bonham Carter also appeared in episodes of Miami Vice as Don Johnson's love interest during the 1986–87 season and then, in 1987 opposite Dirk Bogarde in The Vision and Stewart Granger in A Hazard of Hearts. Bonham Carter was originally cast in the role of Bess McNeill in Breaking the Waves, but backed out during production due to "the character's painful psychic and physical exposure," according to Roger Ebert. The role went to Emily Watson, who was nominated for an Academy Award for her performance.

Her early films led to her being typecast as a "corset queen," and "English rose," playing pre- and early 20th century characters, particularly in Merchant-Ivory films. She played Olivia in Trevor Nunn's film version of Twelfth Night in 1996. One of the high points of her early career was her performance as the scheming Kate Croy in the 1997 film adaption of Wings of the Dove which was highly acclaimed internationally and netted her first Golden Globe and Academy Award nominations. She has since expanded her range, with her more recent films being Fight Club, Wallace & Gromit: The Curse of the Were-Rabbit, and partner Tim Burton's Charlie and the Chocolate Factory, Corpse Bride, Big Fish, Sweeney Todd: The Demon Barber of Fleet Street, and Alice in Wonderland.

In 2001, Bonham Carter began her relationship with director Tim Burton, whom she met while filming Planet of the Apes. Burton has taken to casting her in his films, including Big Fish, Corpse Bride, Charlie and the Chocolate Factory, Sweeney Todd: The Demon Barber of Fleet Street, Alice in Wonderland, and Dark Shadows. They live in two adjoining houses in Belsize Park, London ]Bonham Carter owned one of the houses, Burton later purchased the other and they connected the two. In 2006, they bought the Mill House in Sutton Courtenay, England. It was previously leased by her grandmother, Violet Bonham Carter, and owned by her great-grandfather, former Prime Minister Herbert Asquith.

On 4 October 2003, Bonham Carter gave birth to their son Billy Raymond Burton. Bonham Carter gave birth to their daughter Nell Burton, on 15 December 2007 in Central London. She says she named her daughter Nell after all the "Helens" in her family. Bonham Carter told The Daily Telegraph and several other interviewers of her struggles with fertility and the difficulties she had during her pregnancies. She also said that before the conception of her daughter, she and Burton had been trying for a baby for two years and although they conceived naturally, they were considering IVF.