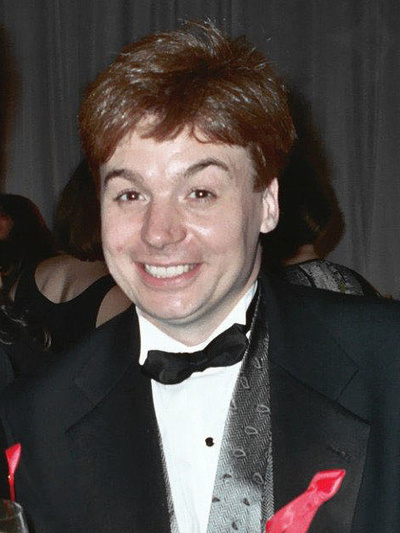 Michael John "Mike" Myers (born May 25, 1963) is a Canadian actor, comedian, singer, screenwriter, and film producer. He is most known for his roles in various popular films, including playing the title characters of the films Wayne's World, Austin Powers, and Shrek. He has also been a recurring member of the cast of the NBC sketch show Saturday Night Live.

Myers was born and raised in Scarborough, Ontario, Canada, the son of British-born parents Eric Myers (1922–1991), an insurance man and World War II veteran of the Royal Engineers, and his wife Alice E. (née Hind; born 1926), an office supervisor and veteran of the Royal Air Force. Both of his parents are from Liverpool, England. He has two older brothers, Peter Myers and Paul Myers, an indie rock singer-songwriter, broadcaster and author. Myers is of English,Irish, and Scottish ancestry, and was raised Protestant. He holds three citizenships, American, British, and Canadian.

Myers began school at Bishopbriggs Academy then changed to Sir John A. Macdonald Collegiate Institute in Scarborough, Ontario and then graduated from Stephen Leacock Collegiate Institute in Scarborough, Ontario. He began performing in commercials at age eight, and at ten he made a commercial for British Columbia Hydro Electric, with Gilda Radner playing his mother. When he graduated from high school, he joined the Second City Theatre. He left to tour Britain with comedian Neil Mullarkey.

Myers began dating actress and comedy writer Robin Ruzan in the late 1980s after meeting at a hockey game in Chicago, during which Myers caught a puck and used the incident as an icebreaker to strike up a conversation with Ruzan. The couple married in 1993, and Myers later referred to Ruzan as "his muse". The couple filed for divorce in December 2005.

In 2006, cafe owner Kelly Tisdale confirmed reports that she and Myers were dating, telling the National Enquirer, "we're actually surprised you didn't find out about us sooner." Myers and Tisdale wed in New York in the fall of 2010. The couple have a son, Spike, born in September 2011.