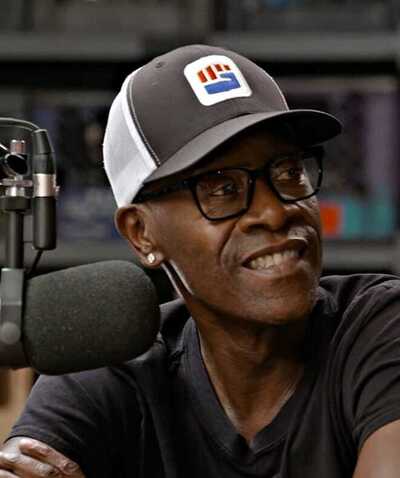 Donald Frank Cheadle Jr. ( ; born November 29, 1964) is an American actor and filmmaker. He is the recipient of multiple accolades, including two Grammy Awards, a Tony Award, two Golden Globe Awards and two Screen Actors Guild Awards; additionally he has earned nominations for an Academy Award, two British Academy Film Awards and 11 Primetime Emmy Awards. His Emmy, Grammy, Oscar and Tony nominations make him one of few black individuals to be nominated for the four major American entertainment awards (EGOT).

Following early roles in Hamburger Hill (1987), and as the gangster "Rocket" in the film Colors (1988), Cheadle built his career in the 1990s with roles in Devil in a Blue Dress (1995), Rebound: The Legend of Earl 'The Goat' Manigault (1996), Rosewood (1997), and Boogie Nights (1997). His collaboration with director Steven Soderbergh resulted in the films Out of Sight (1998), Traffic (2000), and The Ocean's Trilogy (2001–2007). Cheadle was nominated for an Academy Award for Best Actor for his portrayal of Rwandan hotel manager Paul Rusesabagina in the historical drama film Hotel Rwanda (2004). He was the co-producer of Crash, which won the Academy Award for Best Picture in 2005. Cheadle extended his global recognition with his role as James Rhodes / War Machine in the Marvel Cinematic Universe beginning with Iron Man 2 (2010), replacing Terrence Howard. He will lead the upcoming Disney+ series Armor Wars as part of the franchise.

In 2016, he received his first Grammy Award, winning Best Compilation Soundtrack for Visual Media for the soundtrack Miles Ahead. In 2022, he received a second Grammy for Best Spoken Word Album for his narration of the audiobook Carry On: Reflections for a New Generation from John Lewis; he also received a Tony Award for Best Musical as a producer for the musical A Strange Loop.