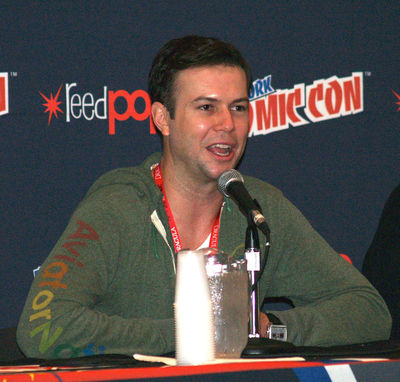 Taran Hourie Killam (born April 1, 1982) is an American actor, comedian, and writer. He is best known for his television work on shows such as The Amanda Show, Wild 'n Out, Mad TV, and Saturday Night Live. Killam is also known for his portrayal of a teen pop star in the 2004 Disney Channel Original Movie Stuck in the Suburbs.

Killam performed the role of King George III in the Broadway production of Hamilton at the Richard Rodgers Theatre, ending his run on the evening of April 13, 2017.

Killam was born on April 1, 1982 in Culver City, California, and grew up in Big Bear Lake, California. He graduated from the Los Angeles County High School for the Arts. Killam attended the University of California, Los Angeles for one year in 2000.

In 1994, Killam made his first film appearance as a young boy in Naked Gun 33⅓: The Final Insult. Killam was featured on Nickelodeon's The Amanda Show, a sketch-comedy vehicle for Amanda Bynes, on which he played Spaulding, a boy who had a huge crush on Moody, in the soap opera parody "Moody's Point".

Killam joined the cast of MADtv as a featured player during its seventh season from 2001 to 2002. Of the 25 episodes that aired during MADtv's seventh season, Killam appeared fully in 13 episodes. Joining the MADtv cast at age 19, Killam was the youngest cast member hired on the show and the only cast member on MADtv to get his start on children's shows (similar to Kenan Thompson on Saturday Night Live). He was a regular cast member on the third and fourth seasons of Nick Cannon's Wild 'N Out. In 2005, Killam co-starred in the television pilot Nobody's Watching, which never aired on network TV. The pilot gained popularity after it was leaked online and webisodes were produced from 2006 to 2007.

Killam co-starred in the 2004 Disney Channel original film Stuck in the Suburbs. After MADtv, Killam appeared on TV shows such as Jake in Progress, Still Standing, Boston Public, Drake & Josh, Do Over, Roswell and Judging Amy. He has appeared on Scrubs and Scrubs: Interns as Jimmy (the Overly Touchy Orderly). Killam appeared as a contestant on the episode of The Price Is Right which aired on December 7, 2006. The episode was re-aired on July 19, 2007.

He has been in Big Fat Liar, Just Married, Anderson's Cross, and My Best Friend's Girl.

Killam was a member of the Los Angeles-based improvisational and sketch-comedy troupe the Groundlings. He retired from the main company in 2012.

On September 25, 2010, Killam joined the cast of Saturday Night Live for the 36th season, making him the second Nickelodeon veteran (after Kenan Thompson) to join SNL and the second SNL cast member who was previously a cast member on the sketch show MADtv (after Jeff Richards). Killam named Eddie Murphy as his favorite SNL cast member and Arcade Fire as his favorite musical guest. In August 2016, Killam along with Jay Pharoah were let go from SNL.

After several years of dating, Killam and Canadian actress Cobie Smulders became engaged in January 2009. They married on September 8, 2012, in Solvang, California. The couple have two daughters. The first, Shaelyn Cado Killam, was born May 16, 2009; the second, named Joelle, was born in January 2015.