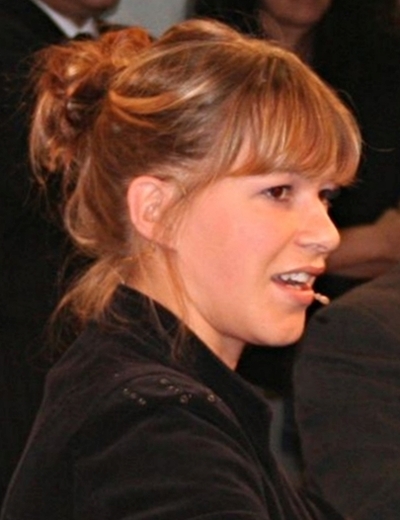 Franka Potente (born 22 July 1974) is a German actress and singer. She first appeared in the comedy After Five in the Forest Primeval (1995), for which she won a Bavarian Film Award for Best Young Actress. Her breakthrough came in 1998, when she had the leading role in the acclaimed action thriller Lola rennt (released in English as Run Lola Run). Potente received Germany's highest film and television awards for her performances in Run Lola Run and the television film Opernball. After half a decade of critically acclaimed roles in German films, Potente went on to land the role of Barbara Buckley in Blow (2001), and Jason Bourne's love interest in the Bourne film series.

The elder of two children, Potente was born in Münster, West Germany, and raised in nearby Dülmen. Her mother, Hildegard, is a medical assistant, and her father, Dieter Potente, is a teacher. Her Italian surname stems from her great-grandfather, a Sicilian slater who immigrated to Germany during the 19th century. When she was 17 years old, Potente spent a few months as an exchange student in Humble, a suburb of Houston, Texas. She noted in an interview she "had an American boyfriend, went to football games and to my American prom. I was so serious about my American boyfriend, I brought him back to Germany with me to visit my parents. They were horrified."

After finishing high school in Germany, Potente enrolled at the Otto Falckenberg School of Performing Arts in Munich. Potente took acting jobs outside school time and appeared in her first movie in the 1995 student film Aufbruch. She was then spotted by a casting agent and appeared in the film Nach Fünf im Urwald (After Five in the Forest Primeval), directed by her then-boyfriend, Hans Christian Schmid. She received the 1996 Bavarian Film Award for Young Talent for her work in this film. She then finished her last year of training at the Lee Strasberg Theatre Institute in Manhattan.[citation needed]

Potente returned to Europe and worked in German and French films. She was cast as the lead in Lola Rennt (Run Lola Run) after meeting the director, Tom Tykwer, in a café. The part was written for her and the film was a small-budget art house film production. The film and Potente's performance received acclaim; Variety wrote that her performance was "heroic, fierce, frightened and vulnerable all at once", while eFilmCritic.com called her casting a "smart choice". Run Lola Run was a commercial success, with a $14,533,173 worldwide gross from a budget of $1 million. Potente also performed on the film's soundtrack. She then appeared in the German-language horror film Anatomy (2000), which enjoyed box office success. Her performance in the film was called "gutsy" by Variety. In the same year, she also had the starring role in the romantic thriller The Princess and the Warrior, directed by Tykwer. She received nominations for the European Film Award and the German Film Award for Best Actress.

Potente's first English-language role was that of a film editor in Storytelling (2001). She also had a supporting role in Blow, alongside Johnny Depp. The film gained mixed reviews and was a moderate box office success. She said in an interview with Contactmusic that her American accent in the film was due to two months of practice. She next appeared in The Bourne Identity (2002) with Matt Damon. The movie had a positive reception and Potente and Damon's strong chemistry was praised by critics at Slant magazine. She reprised her role in The Bourne Supremacy. In 2006, she starred with Eric Bana and Marton Csokas in the Australian drama film Romulus, My Father, for which she was nominated for an Australian Film Industry Award for Best Lead Actress. She wrote and directed Der die Tollkirsche ausgräbt, a silent comedy film that also premiered in 2006. Starting on 22 May 2007, Potente had a three-episode recurring role in the FX drama The Shield, where she played Diro Kesakhian, "the ruthless godmother of L.A.'s Armenian mafia".

After appearing in Eichmann (2007), she had one of the lead roles in the biographical film Che, which opened at the 2008 Cannes Film Festival. Remarking on working with director Steven Soderbergh, she stated: "When we were working, he was almost invisible, in a sense. He always stayed in the forest. He was like a chameleon. He was hidden behind leaves and stuff. He almost made himself dissolve to get the result that he had." In 2009, she appeared in the House television series two-part episode "Broken" and in 2010, she appeared in Shanghai. The film was released only in China, where it grossed $9,199,466. In January 2011, she played Hilda in the BBC drama The Sinking of the Laconia. She then starred as the brothel madam Eva Heissen in BBC America's first original scripted series, Copper. The show premiered to 1.1 million viewers during its broadcast, the largest debut in the network's history, and was renewed for a second season. She also guest starred in two episodes of American Horror Story: Asylum.

In 2014, Potente landed a role on the FX series The Bridge as Eleanor Nacht. In September 2015, she joined the cast of the horror film sequel The Conjuring 2 as real-life German-British parapsychologist Anita Gregory. In 2016, Potente was cast in a supporting role in the BBC period drama miniseries Taboo, alongside Tom Hardy.

Potente was in a relationship with director Tom Tykwer from 1998 until January 2003. She then briefly dated Eric Melvin, the guitarist for the punk band NOFX.

In April 2011, Potente and her partner, actor Derek Richardson, welcomed their first child, a daughter named Polly. In mid-2012, the couple were married. In 2013, they welcomed their second daughter, Georgie.