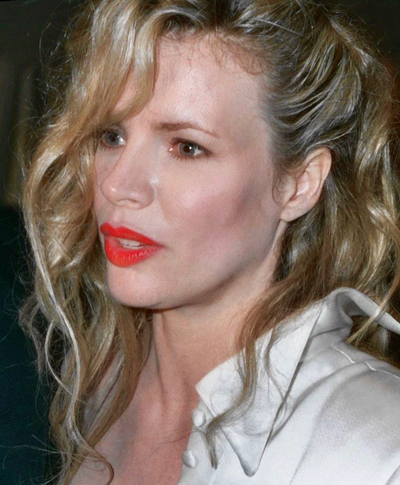 She is known for her portrayals of Domino Petachi, the Bond girl in Never Say Never Again (1983), and Vicki Vale, the female lead in Batman (1989). Basinger received a Golden Globe Award for Best Supporting Actress – Motion Picture nomination for her work in The Natural (1984). She won an Academy Award, Golden Globe, and Screen Actors Guild Award for Best Supporting Actress for her performance in L.A. Confidential (1997). Basinger also acted in the movies 9½ Weeks (1986), I Dreamed of Africa (as Kuki Gallmann) and 8 Mile (2002).

Basinger was born in Athens, Georgia, on 8 December 1953. Her mother, Ann Lee (née Cordell), was a model, actress, and swimmer who appeared in several Esther Williams films. Her father, Donald Wade Basinger, was a big band musician and loan manager; as a U.S. Army soldier, he landed in Normandy on D-Day (June 6, 1944). The third of five children, she has two brothers, Mick and Skip, and two sisters, Ashley and Barbara. Basinger's ancestry includes German,Swedish, Irish, and Cherokee Native American, and she was raised a Methodist. The relationship between her parents was tenuous, and her father's critical nature affected her emotionally from a young age. She has said. "I just couldn't please him enough. He never complimented me ever. And I saw a lot of silence. Children always read into silence as something terrible." Basinger has described herself as extremely shy and lonely during her childhood, and has stated that she faced many hardships during her school years as a result.

Basinger studied ballet from about age three to her mid-teens. By her mid teens, she grew in confidence and successfully auditioned for the school cheerleading team. She was suspended from her elementary school talent show, after she stripped down to a bikini and sang "The Game of Love". When Basinger was 16, she started modeling, by winning the Athens Junior Miss contest. She then won the title “Junior Miss Georgia”. She competed in the national Junior Miss pageant and was offered a modeling contract with the Ford Modeling Agency. She turned it down in favor of singing and acting, and enrolled at the University of Georgia, but soon reconsidered and went to New York to become a Ford model. Despite earning $1,000 a day, Basinger never enjoyed modelling, saying "It was very hard to go from one booking to another and always have to deal with the way I looked. I couldn't stand it. I felt myself choking." Basinger has said that even as a model, when others relished looking in the mirror before appearing, she abhorred it and would avoid mirrors out of insecurity.

Not long after her Ford deal, Basinger appeared on the cover of magazines. She appeared in hundreds of ads throughout the early 1970s, most notably as the Breck Shampoo girl. She alternated between modeling and attending acting classes at the Neighborhood Playhouse, as well as performing in Greenwich Village clubs as a singer.

In 1976, after five years as a cover girl, Basinger quit modelling and moved to Los Angeles to act. She had guest roles on TV shows such as Charlie's Angels and The Six Million Dollar Man, as well as a starring role on the short-lived series Dog and Cat (1977).

In 1978, Basinger played the lead role in the made-for-TV movie Katie: Portrait of a Centerfold, as a smalltown young woman, who goes to Hollywood to become an actress and winds up a famous centerfold for a men's magazine. She was cast as prostitute Lorene Rogers in the 1979 NBC miniseries remake of the 1953 film From Here to Eternity. Basinger reprised that role in a 13-episode series spinoff in 1980. She made her theatrical feature debut in Hard Country (shot in 1979 and released in 1981), where she starred opposite Jan Michael Vincent. Her next film was the 1982 adventure Mother Lode, featuring Charlton Heston and directed by Fraser Clarke Heston.

Basinger's breakout role was as Bond girl Domino Petachi in Never Say Never Again (1983), opposite Sean Connery. She received a Golden Globe nomination for her performance in Barry Levinson's The Natural (1984), opposite Robert Redford. In 1984, Basinger began work on the sexually provocative film 9½ Weeks (released 1986), which co-starred Mickey Rourke. Oscar-winning writer-director Robert Benton cast her in the title role for the film Nadine (1987) with Jeff Bridges. Basinger played Vicki Vale in the 1989 blockbuster Batman, directed by Tim Burton.

Basinger dated and lived with Dale Robinette in the 1970s.

On October 12, 1980, Basinger married makeup artist Ron Snyder-Britton (born 1938), who worked on the crew of her film Hard Country (1981). They separated in 1988 and were officially divorced in 1989. He later wrote a memoir in 1998, Longer than Forever, about their time together and her rumored affair with actor Richard Gere, with whom she starred in No Mercy (1986) and Final Analysis (1992). After the divorce Basinger dated casting director Jon Peters and singer Prince.

She met her second husband, Alec Baldwin, in 1990 when they played lovers in The Marrying Man. They married on August 19, 1993, and appeared in the remake of The Getaway (1994). They played themselves in a 1998 episode of The Simpsons (which includes Ron Howard), in which Basinger corrects Homer Simpsonon the pronunciation of her last name and polishes her Oscar statuette. Basinger and Baldwin have a daughter, Ireland Eliesse Baldwin (born October 23, 1995), thus connecting her to the well-known Baldwin family. They separated in December 2000 and were officially divorced in February 2002. In the following years, the pair were embroiled in a custody battle over their daughter. In a 2000 interview with Charlie Rose, Basinger confessed to having suffered from agoraphobia in the early 1980s and suffering deep-rooted insecurities. Basinger says that she has a "humorous relationship" with God and a strong faith.