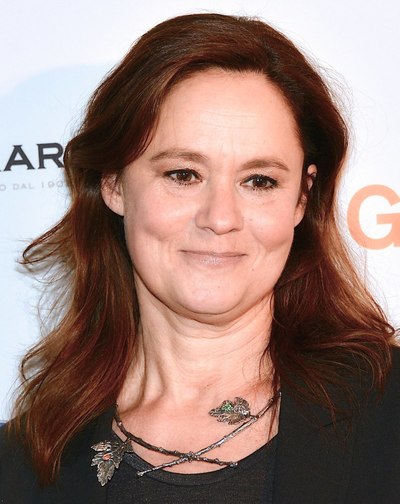 Pernilla August (Swedish pronunciation: [pɛ²ɳɪlːa ˈaʊgɵst] (About this soundlisten), born Mia Pernilla Hertzman-Ericson; 13 February 1958) is a Swedish actress, director and screenwriter. Being one of Sweden's leading actresses and a longtime collaborator with director Ingmar Bergman, she won the Best Actress Award at the 1992 Cannes Film Festival for her role in his The Best Intentions. She is best known for portraying Shmi Skywalker in Star Wars: Episode I – The Phantom Menace and Star Wars: Episode II – Attack of the Clones.

August started acting during her childhood in theatre and at school. Her professional acting career started in 1975 when director Roy Andersson cast her in a minor role in the film Giliap the same year, followed from 1979 by films by other directors, Vilgot Sjöman (among them, the film about Alfred Nobel, 1983) and Lasse Hallström. She studied acting at Swedish National Academy of Mime and Acting in Stockholm 1979–82. Before finishing her studies, she attracted the attention of Ingmar Bergman, who cast her in his film Fanny and Alexander (1982), playing the nanny in the director's romanticised portrait of his childhood. That marked the beginning of two decades of collaboration, collecting several international awards, including television series The Best Intentions (1991), where she portrayed Bergman's mother and met her second husband to be, director Bille August, and TV-productions Private Confessions (1996), directed by Liv Ullmann and Bergman's own In the Presence of a Clown (1997).

She also starred in Bo Widerberg's The Serpent's Way (1986) as well as his TV-production of Henrik Ibsen's The Wild Duck (1989). Among the many Scandinavian and international films are also Bille August's Jerusalem (1996), Richard Hobert's Where the Rainbow Ends (1999) [granted her a Guldbagge Award as Best actress] and The Birthday (2000], I Am Dina (2002), Björn Runge's Om jag vänder mig om/If I Turn Around (2003) [a Silver Bear at Berlin International Film Festival 2004 and more Best actress awards], Per Fly's Manslaughter (2005), Swedish-Taiwanese Miss Kicki (2009) and Jan Troell's Truth and Consequence (2012).

At the Royal Dramatic Theatre in Stockholm, she has acted in several plays, starting 1981, several directed by Ingmar Bergman and touring internationally. These include Ophelia in William Shakespeare's Hamlet (1986) [a part she has also played in another Swedish television film, 1985], August Strindberg's A Dream Play (1986), Nora in Henrik Ibsen's A Doll's House (1989), Hermione in Bergman's special version of A Winter's Tale (1994), the title role in Schiller's Mary Stuart (2000) and Helene Alving in Ibsen's Ghosts (2002). She also worked with Russian director Jurij Ljubimov in Alexander Pushkin's A Feast in the Time of Plague (1996). In 1983-84, she worked at Folkteatern i Gävleborg (The Folk Theatre in Gävleborg) with director Peter Oskarson in Anton Chekhov's Three Sisters. In 2008, she acted in the stage production of Steel Magnolias in Stockholm.

Many in the English-speaking world know her best as Shmi Skywalker, the mother of Anakin Skywalker, from Star Wars: Episode I – The Phantom Menace (1999) and its sequel Attack of the Clones (2002). She also appeared in The Young Indiana Jones Chronicles. She shared the role as Virgin Mary in Mary, Mother of Jesus (1999) with Melinda Kinnaman. She played a bomber in the Swedish film Sprängaren (2001). In 2011, she reprised her role as Shmi Skywalker in the third season of Star Wars: The Clone Wars for the episode "Overlords", which aired on 28 January.

After her directorial debut with the 2005 short film Time Bomb (Blindgångare), she debuted as feature-film director and screenwriter in 2010 with Beyond, starring Noomi Rapace and Ola Rapace. The film was selected as the Swedish entry for the Best Foreign Language Film at the 84th Academy Awards and was much awarded with Swedish Guldbagge Awards and more; August won for Best Director and Best Script. In October 2011, August was asked to direct a new Danish drama series, Arvingerne, an offer she accepted. The series premiered on DR on 1 January 2014. Her two youngest daughters have cameos in the series.

Among many international awards and nominations, at the 1992 Cannes Film Festival she won the award for Best Actress, for her role in Bille August's The Best Intentions. For the same film she also won the Best Actress award at the 28th Guldbagge Awards.

In 2002 she was honored with the Royal Swedish medal Litteris et Artibus for her artistic work.

August was born in Stockholm. She has been married twice and changed her name both times. Her first marriage was in 1982 to Klas Östergren, with whom she has one daughter; the marriage ended in divorce in 1989. The second marriage was in 1991 to Bille August, with whom she has two daughters; this marriage also ended in divorce, this time in 1997. She has three daughters: Agnes, Asta and Alba.