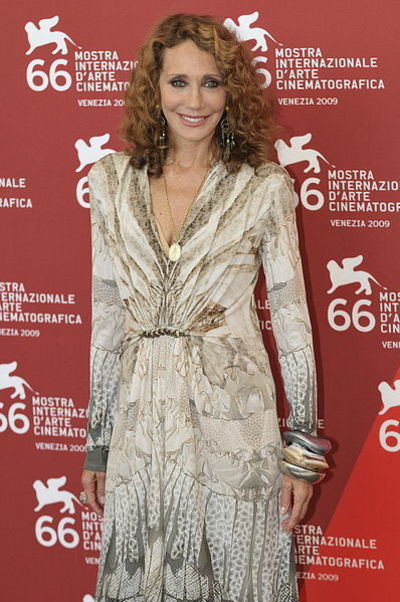 Berenson's maternal grandmother was the fashion designer Elsa Schiaparelli, and her maternal grandfather was Count Wilhelm de Wendt de Kerlor, atheosophist and psychic medium. Her younger sister, Berinthia, became a model, actress, and photographer as Berry Berenson. She also is a great-grandniece of Giovanni Schiaparelli, an Italian astronomer who believed he had discovered the supposed canals of Mars, and a second cousin, once removed, of art expert Bernard Berenson (1865–1959) and his sister Senda Berenson (1868–1954), an athlete and educator who was one of the first two women elected to the Basketball Hall of Fame.

A fashion model who came to prominence in the early 1960s—"I once was one of the highest paid models in the world", she told The New York Times—Berenson appeared on the cover of the July 1970 issue of Vogue as well as the cover of Time on 15 December 1975. She appeared in numerous fashion layouts in Vogue in the early 1970s and her sister Berry was a photographer for the magazine as well. She was known as "The Queen of the Scene" for her frequent appearances at nightclubs and other social venues in her youth, and Yves Saint Laurent dubbed her "the girl of the Seventies".

Eventually she was cast in several prominent film roles, including Gustav von Aschenbach's wife in Luchino Visconti's 1971 film Death in Venice, the Jewish department store heiress Natalia Landauer in the 1972 film Cabaret, for which she received some acclaim (including two Golden Globenominations, a BAFTA nomination and an award from the National Board of Review), and the tragic beauty Lady Lyndon in the Stanley Kubrick film Barry Lyndon (1975). Vincent Canby of The New York Times stated of her performance: "Marisa Berenson splendidly suits her costumes and wigs."

Berenson appeared in a number of other movies, most of them shot in Europe, as well as in made-for-TV movies in the United States, such as the Holocaust-themed drama Playing for Time (1980). She guest-hosted an episode of The Muppet Show during its third season in 1978. She most recently appeared in the 2010 film I Am Love.

In the early 1970s, Berenson was the companion of the French banking heir Baron David René de Rothschild, the younger son of Baron Guy de Rothschild. She was also in a relationship with Austrian actor Helmut Berger.

Her first husband was James Randall, a rivet manufacturer; they wed in Beverly Hills, in 1976 and divorced in 1978. They have one daughter, Starlite Melody Randall (born 1977).

Her second husband was Aaron Richard Golub, a lawyer, whom she married in 1982 and divorced in 1987. During the divorce proceedings, the judge ruled "the increased value of Ms. Berenson's acting and modeling career during the marriage were marital property" and therefore subject to consideration in any settlement agreements.

On 11 September 2001, her younger sister and sole sibling, Berry Perkins, widow of actor Anthony Perkins, was killed in the first flight to hit the World Trade Center. Marisa was also in an airplane during the terrorist attacks, flying from Paris to New York. In an interview with CBS, she told of the experience and how hours later she landed in Newfoundland (flights were diverted to Canada), and was told of her sister's death by a phone call with her daughter. Said Berenson: "I have hope and tremendous faith. I think that's what gets you through life ... through tragedies is when you have faith."