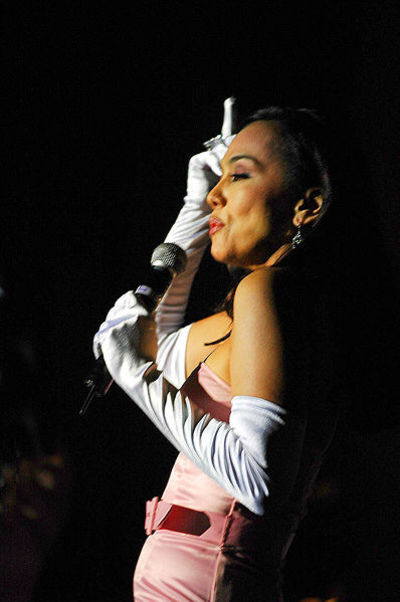 Maria Socorro Ledesma (born March 16, 1955), better known as Kuh Ledesma, is a Filipino pop and jazz singer, actress, (painter) model and fashion designer. She is known in the Philippines as the 'Pop Diva' and wants herself to be remembered as 'The Renaissance Woman' according to her in her interview on Tonight with Boy Abunda.

Ledesma has been performing for 35 years in the music industry which encompasses more than 1,000 concerts all over the world, numerous awards in the Philippines, and 20 albums in the Philippine recording industry. She was the first Filipino singer to become a recipient of the Salem Music Awards in London in March 1989. In 1997, she released her international debut album Precious in collaboration with American and Filipino songwriters, arrangers and musicians.

Ledesma's career in music began when she joined the Lastiko band (formerly known as Ensalada band) in Bacolod while she was still a nursing student at Colegio San Agustin-Bacolod. Ledesma finished the course and successfully passed the Philippine National Nursing Board Exam and became a registered nurse. Ledesma and her bandmates Toto Gentica and Jet Montelibano later went to Manila to form the Music & Magic band which became pivotal for her career. She later received the lead role in the pop ballet Rama Hari by Alice Reyes. She eventually went solo with "Dito Ba?", Ledesma's first hit song.

During the 1980s, Ledesma has performed solo concerts at the Cultural Center of the Philippines (CCP), the Araneta Coliseum, PICC and the Philippine Folk Arts Theater.

In 1982, Ledesma launched an all-Filipino concert, 'Ako ay Pilipino' ("I am a Filipino") at the Cultural Center of the Philippines which featured a repertoire of ethnic sounds, classic kundimans and pop songs, tapping into the rich node of indigenous art and contemporary pop music to produce alternative approaches to songs. Her show eventually became a television special followed by two albums. This was immediately followed by another production at the CCP, 'Inspired Madness' in 1983, which was created in collaboration with Philippine film director Peque Gallaga and musical director Ryan Cayabyab.

During the political ambience of the 1980s, Ledesma paid tribute to Ninoy Aquino at the end of one of her shows at the Cultural Center of the Philippines by singing an a cappella rendition of "Impossible Dream" and "You'll Never Walk Alone (Hindi Ka Nagiisa)". From 1984 to 1986, Ledesma joined the APO Hiking Society in 'Ang Pinoy Nga Naman (1, 2, and 3)' at the Folk Arts Theater.

On June 3, 1988, Ledesma performed in the musical KUH of the Year at the prestigious Carnegie Hall in New York.

In March 1989, Ledesma was chosen as the first Philippine singer to be the recipient of the Salem Music Awards after competing against other top singers from Asia at the Royal Albert Hall in London.

In the 1990s, Ledesma had a series of concerts with foreign artists such as Noel Pointer, Jack Jones, Kenny Rankin, The Platters and Michel Legrand followed by other concerts with popular Philippine artists such as Regine Velasquez (U.S. tour, 1999), Pops Fernandez and Jaya ('Power of Two', 1999). After Ledesma's four-night concert with the jazz violinist Noel Pointer, she released the album, The Voice, The Violin. Ledesma was also one of the judges in the coronation night of Miss Universe 1991. In February 1994, Ledesma had the 'Two of Hearts' concert with balladeer Jack Jones. During 1995's Valentine's season, she performed with Kenny Rankin. Ledesma started the new millennium in a Valentine show with The Platters. In 2002, Ledesma had Valentine presentation with Michel Legrand.

Ledesma has her own production company Headline Concepts and built concert venues such as the Music Museum (a combined theater-restaurant built in 1988 at Greenhills, San Juan, Metro Manila) and the Republic of Malate. The Republic of Malate is a facility located along Mabini Street in Manila, which houses a restaurant, a bar, a watering hole, a game room, a tobacco area, a dance club and a theater. However, The Republic of Malate was destroyed by a fire in November 2001. Ledesma has plans of rebuilding the facility.

Ledesma had a regular monthly television special called Akuhstic Café which is a musical travelogue that presented viewers the urban night life of Metro Manila by visiting clubs, lounges and concerts. Akuhstic Café was a grand finalist in the Asian Television Awards in Singapore for best musical program.

In April 1997, Ledesma became the featured artist of the 'Muling Aawit ang Pasig', a benefit concert of former Philippine First Lady Ming Ramos for the restoration of the Pasig River.

In 1998, the centennial year of Philippine Independence, after producing a Valentine concert at Fort Santiago, Manila, Ledesma was commissioned by the National Centennial Commission to stage a three-night centennial concert of the year, 'Lahi…Kami ang Pilipino' which was held at the Expo Center in the former Clark Airforce Base.

Ledesma celebrated her 25th year in the music industry by holding a series of shows at Captain's Bar of the Mandarin Oriental Manila ('Kuh Ledesma Presents'). Ledesma has a goal of publishing a book of photographs to chronicle her career.

Ledesma is also a member of the Artista Para Sa Pagbabago ("Artists for Change"), an organization of artists, environmentalists and businessmen. She was also the president of the Restaurant Owners Association of Malate.

During the 2001 Philippine national elections, Ledesma was chosen by the PINATUBO (Pinag-isang Lakas Tungo sa Pagbabago) Party as a first nominee for congress. The PINATUBO Party has the goal of alleviating poverty in the Philippines through grass-roots development.

In 2002, Ledesma teamed up with composer Michel Legrand in a back to back concert at the Philippine International Convention Center. Years prior to that, she teamed up with international artists Noel Pointer, Jack Jones and Kenny Rankin.

In 2009, she went on a tour called 'A Love Affair' with her daughter Isabella to New Zealand where she had a series of concerts in Auckland, Wellington, Christchurch and Hamilton.

Apart from performing and producing concerts and special shows, Ledesma also travels widely in the Philippines and abroad to deliver values formation lectures, and inspirational and motivational talks.

In December 2011, she released her first gospel album entitled Fragrance of Worship.

Ledesma is also famous for putting together top artists in one concert such as the 'Divas 4 Divas' concert tour with Regine Velasquez, Zsa Zsa Padilla and Pops Fernandez.

Ledesma released her album Memories on Universal Records in 2014. She re-recorded her song, "I Think I'm In Love" for the album. American musician Marie Digby has covered the song.

Ledesma was married to Luisito "Louie" Gonzalez (President Elpidio Quirino's grandson). Gonzalez’s mother Vicky Quirino, daughter of the former President, married shipping magnate Francisco Delgado after the death of his first wife. Ledesma's former husband Gonzalez voluntarily surrendered to the NBI on July 16, 2008, after an arrest warrant for murder and physical injuries was issued by Manila Regional Trial Court Branch 32 Judge Thelma Medina amid the Court of Appeals' review of the case. Gonzalez was held for the killing of his step brother Federico Delgado on March 10, 2007, who was found dead with multiple stab wounds.

Ledesma has a daughter named Isabella Gonzalez, who is also a recording artist.

Ledesma is a born-again Evangelical Christian.