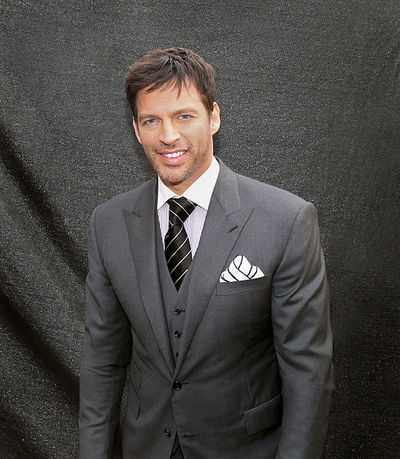 Joseph Harry Fowler Connick, Jr. (born September 11, 1967) is an American singer, conductor, pianist, actor, and composer. He has sold over 25 million albums worldwide. Connick is ranked among the top 60 best-selling male artists in the United States by the Recording Industry Association of America, with 16 million in certified sales. He has seven top-20 US albums, and ten number-1 US jazz albums, earning more number-one albums than any other artist in the US jazz chart history.

Connick's best selling album in the United States is his 1993 Christmas album When My Heart Finds Christmas, which also is one of the best selling Christmas albums in the United States. His highest charting album, is his 2004 release Only You which reached No. 5 in the U.S. and No. 6 in Britain. He has won three Grammy awards and two Emmy Awards. He played Grace's husband, Dr. Leo Markus, on the TV sitcom Will & Grace from 2002 to 2006.

Connick began his acting career as a tail gunner in the World War II film, Memphis Belle, in 1990. He played a serial killer in Copycat in 1995, before being cast as jet fighter pilot in the 1996 blockbuster Independence Day. Connick's first role as a leading man was in 1998's Hope Floats with Sandra Bullock. His first thriller film since Copycat came in 2003 in the film Basic with John Travolta. Additionally, he played the violent ex-husband in Bug, before two romantic comedies, 2007's P.S. I Love You, and the leading man in New in Town with Renée Zellweger in 2009. In 2011 appeared in the family film Dolphin Tale as Dr. Clay Haskett and in the 2014 sequel, Dolphin Tale 2.

Harry Connick, Jr. was born and raised in New Orleans, Louisiana. His mother, Anita Frances (née Levy; later Livingston; May 22, 1926 – July 1981), was a lawyer and judge in New Orleans and, later, a Louisiana Supreme Court justice. His father, Joseph Harry Fowler Connick, Sr., was the district attorney of Orleans Parish from 1973–2003. His parents also owned a record store. Connick's father is a Catholic of Irish ancestry. Connick's mother, who died from ovarian cancer, was Jewish (her parents had immigrated from Minsk and Vienna, respectively). Connick has a sister, Suzanna; the siblings were raised in the Lakeview neighborhood of New Orleans. Connick is a first cousin of both Jefferson Parish District Attorney, Paul Connick, and State Representative Patrick Connick (of Harvey, Jefferson Parish).

Connick's musical talents soon came to the fore when he started learning the keyboards at age three, playing publicly at age five, and recording with a local jazz band at ten. When Connick was nine years old, he performed the Piano Concerto No. 3 Opus 37 of Beethoven with the New Orleans Symphony Orchestra (now the Louisiana Philharmonic), and later played a duet with Eubie Blake at the Royal Orleans Esplanade Lounge in New Orleans. The song was "I'm Just Wild About Harry". This was recorded for a Japanese documentary called Jazz Around the World. The clip was also shown in a Bravo special, called Worlds of Harry Connick, Junior. in 1999. His musical talents were developed at the New Orleans Center for Creative Arts and under the tutelage of Ellis Marsalis and James Booker.

Connick attended Jesuit High School, Isidore Newman School, Lakeview School, and the New Orleans Center for Creative Arts, all in New Orleans. Following an unsuccessful attempt to study jazz academically, and having given recitals in the classical and jazz piano programs at Loyola University, Connick moved to the 92nd Street YMHA in New York City to study at Hunter College and the prestigious Manhattan School of Music, where a Columbia Records executive Sr. V.P. of A&R, Dr. George Butler, persuaded him to sign with that label. His first record for the label, Harry Connick Junior., was a mainly instrumental album of standards. He soon acquired a reputation in jazz because of extended stays at high-profile New York venues. His next album, 20, featured his vocals and added to this reputation.

With Connick's reputation growing, director Rob Reiner asked him to provide a soundtrack for his 1989 romantic comedy, When Harry Met Sally..., starring Meg Ryan and Billy Crystal. The soundtrack consisted of several standards, including "It Had to Be You", "Let's Call the Whole Thing Off" and "Don't Get Around Much Anymore", and achieved double-platinum status in the United States. He won his first Grammy for Best Jazz Male Vocal Performance for his work on the soundtrack.

Connick made his screen debut in Memphis Belle (1990), about a B-17 Flying Fortress bomber crew in World War II. In that year he began a two-year world tour. In addition he released two albums in July 1990: the instrumental jazz trio album Lofty's Roach Souffle and a big-band album of mostly original songs titled We Are in Love, which also went double platinum. We Are in Love earned him his second consecutive Grammy for Best Jazz Male Vocal.