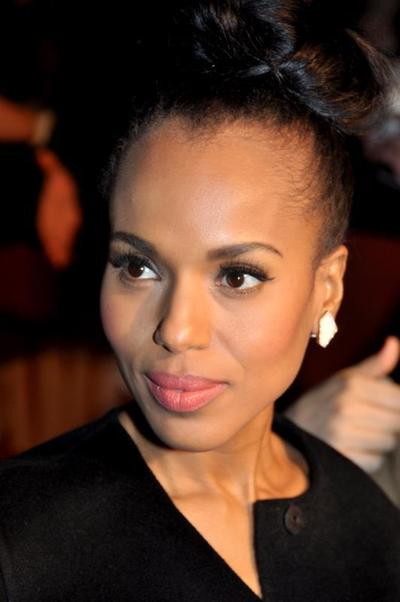 Kerry Marisa Washington (born January 31, 1977) is an American actress. Since 2012, Washington has gained wide public recognition for starring in the ABC drama Scandal, a Shonda Rhimes series in which she plays Olivia Pope, a crisis management expert to politicians and power brokers in Washington DC. For her role, she has been nominated twice for a Primetime Emmy Award for Outstanding Lead Actress in a Drama Series, Screen Actors Guild Award for Outstanding Performance by a Female Actor in a Drama Series, and a Golden Globe Award for Best Actress in a Television Series.

Washington is also known for her roles as Della Bea Robinson, in the film Ray (2004), as Kay in The Last King of Scotland (2006), as Alicia Masters in the live-action Fantastic Four films of 2005 and 2007, and as Broomhilda von Schaft in Quentin Tarantino's Django Unchained (2012). She has also starred in the independent films Our Song (2000), The Dead Girl (2006), Mother and Child (2009) and Night Catches Us (2010). In 2016, she portrayed Anita Hill in the HBO television film Confirmation and was nominated for a Primetime Emmy Award for Outstanding Lead Actress in a Limited Series or a Movie.

Washington was born in the Bronx, New York City, the daughter of Valerie, a professor and educational consultant, and Earl Washington, a real estate broker. Her father's family is of African American origin, having migrated from South Carolina to Brooklyn. Her mother's family is from Manhattan, and Washington has said that her mother is from a "mixed-race background but from Jamaica, so she is partly English and Scottish and Native American, but also descended from African slaves in the Caribbean." Through her mother, she is a cousin of former U.S. Secretary of State Colin Powell.

Washington performed with the TADA! Youth Theater teen group and attended the Spence School in Manhattan from her pre-teen years until graduating from high school in 1994. At age 13, she was taken to watch Nelson Mandela speak at Yankee Stadium upon his release from prison. She attended George Washington University, graduating Phi Beta Kappa in 1998 with a double major in anthropology and sociology. She also studied at Michael Howard Studios in New York City.

In April 2016, Washington confirmed that, in the 1990s in New York, she learned to dance from Jennifer Lopez. During her appearance on The Tonight Show Starring Jimmy Fallon, she told host Jimmy Fallon that "I've been taking dance for a long time, since I was a little girl. I had this very inspiring teacher named Larry Maldonado, for anybody from my neighborhood in the Bronx, he was our role model", Washington continued, "And he had an awesome substitute teacher named Jennifer, who would sometimes step in and teach. But, then she left to move to Los Angeles and be on the TV show In Living Color. So, yes, I learned to dance from JLo!" Washington verified.

Washington got her Screen Actors Guild (SAG) card as a requirement for a commercial that she starred in. Washington made her screen debut in the ABC telefilm Magical Make-Over (1994). She was in the cast of the 1996 PBS sketch comedy-style educational series Standard Deviants, and she appeared in the short "3D" and the feature film Our Song in 2000. She went on to appear in several movies, including Save the Last Dance (2001) and The Human Stain (2003). In 2002 she played Chris Rock's love interest in the spy thriller Bad Company, a film that represented a turning point for her, in that it was the first time in her career that she had made enough money annually to qualify for health insurance under SAG.

In 2004, she played the female lead in Spike Lee's She Hate Me, and she received strong reviews for her performance. After 2004, she held parts in Mr. & Mrs. Smith (2005), Little Man (2006), I Think I Love My Wife (2007), and as a wife of 1970s Ugandan dictator Idi Amin in the UK historical drama The Last King of Scotland (2006). Washington has also appeared in the recurring role of Chelina Hall on the ABC television series Boston Legal, and in several episodes of the A&E cable-TV series 100 Centre Street. In 2007, she co-directed and appeared in the music video for hip-hop artist Common's song, "I Want You", the fourth single from his album Finding Forever and became a spokesperson for L'Oréal, appearing in commercials and ads alongside fellow actresses, Scarlett Johansson and Eva Longoria, Gong Li, Michelle Yeoh, Dian Sastrowardoyo, Aishwarya Rai, Maya Karin and model Doutzen Kroes.

Washington narrated the critically acclaimed documentary about the New Orleans-based teenage TBC Brass Band, From the Mouthpiece on Back. She also appears in Maxwell's "Bad Habits" video. In 2009 Washington performed in The People Speak, a documentary feature film that uses dramatic and musical performances of the letters, diaries, and speeches of everyday Americans, based on historian Howard Zinn's A People's History of the United States.

In 2010, she made her Broadway debut in David Mamet's Race, alongside James Spader (with whom she worked on "Boston Legal"), David Alan Grier, and Richard Thomas. She also appeared in Tyler Perry's 2010 film For Colored Girls. In October 2011, it was confirmed that she would star in Quentin Tarantino's film Django Unchained, which was released in 2012 and received widespread critical acclaim. She was invited to join the Academy of Motion Picture Arts and Sciences in June 2012 along with 175 other individuals.

In 2013, Washington ranked No. 2 in People magazine's 100 Most Beautiful people and was named Woman of the Year by Glamour magazine. The same year, she ranked No. 20 on Forbes magazine's annual list of the highest-paid actors in television and was announced as the new face of Neutrogena skin care. Washington hosted Saturday Night Live on November 2, 2013, where she impersonated Michelle Obama and Oprah Winfrey in a cold opening sketch that satirized criticism of Saturday Night Live for not having had any black female cast members for many years.

Since April 2012, Washington has starred in the ABC drama series Scandal, created by Shonda Rimes, as Olivia Pope, a crisis manager who runs her own crisis management firm called Pope & Associates in Washington, D.C.. In this position, she works for high-profile figures, most notably the President of the United States, who is also her on-off lover. The show has been a commercial and critical success, and has been called one of the most talked about drama series on Facebook and Twitter by BuzzFeed. Washington's performance has earned positive reviews, and in 2013, she won the award for Outstanding Actress in a Drama Series at the 44th NAACP Image Awards and was also presented with the NAACP President's Award. The same year, she was named "Favorite actress" and Scandal "Favorite Drama" of the year at TV Guide's Magazine Fan Favorite Awards  and was also crowned 2013's "TV Star of the Year" by the editors of the magazine. For her work in the second season of Scandal, Washington was nominated for an Emmy at the 65th Primetime Emmy Awards and 66th Primetime Emmy Awards, becoming the first African-American woman to be nominated in the category of Outstanding Lead Actress in a Drama Series in 18 years. She was also nominated for a Screen Actors Guild Award for Outstanding Performance by a Female Actor in a Drama Series as well as a Golden Globe Award for Best Actress in a Television Drama Series.

In addition to Washington's acting, her costumes as Olivia Pope have attracted positive attention, prompting Vanity Fair to name the character one of "The Top Ten Best-Dressed TV Characters" in 2013. According to the show's costume designer, Lyn Paolo, the success of Olivia Pope's wardrobe is based on "this idea of having  wear such soft, feminine colors in a man's world". In 2014, Washington and Paolo won the Influencer Award at the 2014 Ace Fashion Awards for Olivia Pope's stylish clothes on the show.

The Boston Globe ranked Scandal tenth place of its list of "Top 10 political TV shows" in 2015.

In 2014, Washington announced her involvement in Malcolm D. Lee's Is He the One? a romantic comedy from MGM. She played the lead role in Confirmation, an HBO movie directed by Rick Famuyiwa about Anita Hill's testimony during Clarence Thomas Supreme Court nomination, which aired in 2016.

In August 2016, it was announced that Washington would be producing a new ABC television show, Patrol, about female LAPD police officers.

Washington was engaged to actor David Moscow from October 2004 to March 2007. Washington married NFL player Nnamdi Asomugha on June 24, 2013 in Hailey, Idaho. They have a daughter and a son.

As a sort of souvenir or memento, she usually tries to keep something from every character that she plays, such as an item of wardrobe or a piece of furniture from the house the character lived in.

On May 19, 2013, she was the commencement speaker for her alma mater, George Washington University. Before giving her commencement address she was presented with an honorary Doctorate of Fine Arts. 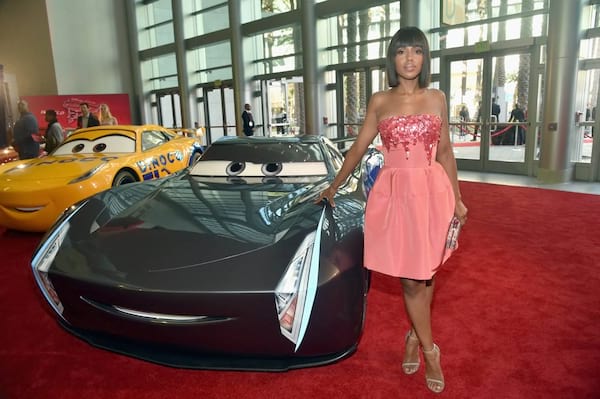 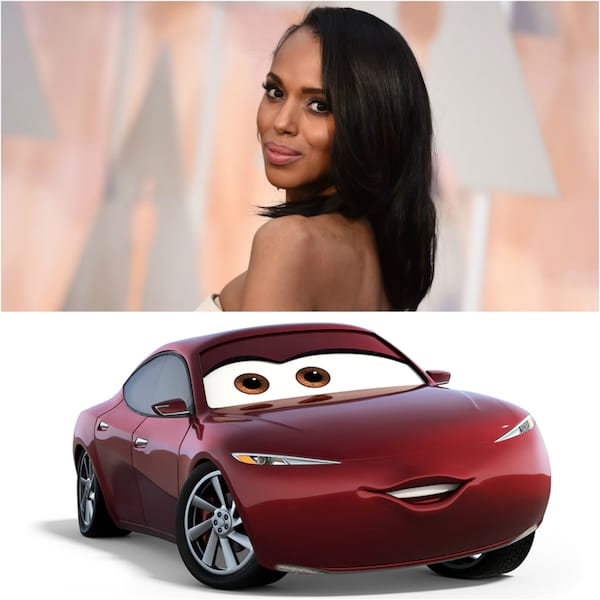