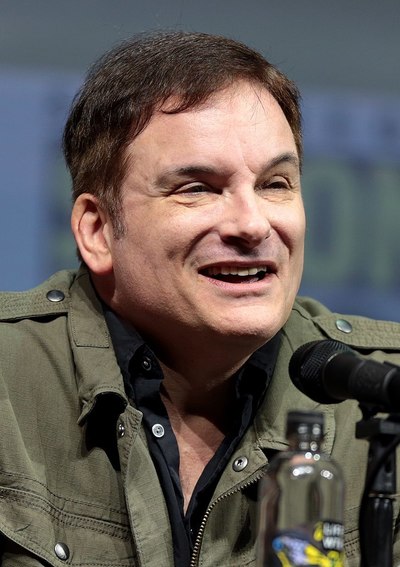 Shane Black (born December 16, 1961) is an American filmmaker and actor. Black has written such films as Lethal Weapon and Lethal Weapon 2, The Monster Squad, The Last Boy Scout, Last Action Hero, and The Long Kiss Goodnight. As an actor, Black is best known for his role as Rick Hawkins in Predator (1987).

As of 2018, his film Iron Man 3 ranks as the fifteenth-highest-grossing film worldwide.

Black was born and raised in Pittsburgh, Pennsylvania, the son of Paul and Patricia Ann Black. His father was in the printing business, and helped Black get an interest in hardboiled fiction, such as the works of Mickey Spillane and the Matt Helm series.

After living in the suburbs of Lower Burrell and Mount Lebanon, Pennsylvania, his family moved to Fullerton, California, during his sophomore year of high school. There he attended Sunny Hills High School and later UCLA where he majored in film and theater. While Black had a long history writing comic strips, short stories, and journalism, only during his senior year did he decide to make a living from it once his classmate Fred Dekker showed him a science fiction script he did for an assignment. Black's older brother Terry also wrote short stories and decided to move into screenplays starting with 1988's Dead Heat.

After graduating, Black worked as a typist for a temp agency, a data entry clerk for the 1984 Summer Olympics and an usher in a Westwood movie theater. Eventually he asked for financial support of his parents during the six-month development of a script, The Shadow Company, a supernatural thriller set in Vietnam. With Dekker's help, the script landed him an agent and several lunch meetings with mid-level studio executives. This attracted 20th Century Fox executives, who were interested in having Black rewrite scripts. Eventually Black wrote an action film script, Lethal Weapon, in about six weeks, which landed him a $250,000 deal with Warner Bros. During the rewrites, Black asked producer Joel Silver for a small acting role in another film Silver was preparing at the time, Predator, a film for which Black also made uncredited contributions to the script. At the same time, Black helped Dekker write The Monster Squad, which along with Lethal Weapon and Predator came out in 1987. Since then, Black has acted in five additional films and in two episodes for the TV series Dark Justice.

Once Warner Bros. requested a Lethal Weapon sequel, Black wrote the first draft of Lethal Weapon 2 with the help of novelist Warren Murphy. Although it was not used, Black said in later interviews that Warner Bros. did not like his original script for Lethal Weapon 2, which was also titled Play Dirty, because of how dark and violent it was and due to his decision to kill off main character Martin Riggs in the ending of the script. Nevertheless, other people thought that his script was brilliant, and he himself considers it to be his best work and the best script he has ever written. Although many fans have tried to find a copy of it, Black's version of the script was never released.

Feeling burned out and having conflicts with the studio, Black left the project after six months, earning only $125,000 (out of a $250,000 payment split with Murphy) for his work. After two sabbatical years, Black decided to take on an old idea of his that emerged during the production of Lethal Weapon and turn it into a full screenplay. The result, The Last Boy Scout, earned him $1.75 million in 1991. Black would also earn $1 million for his rewrite of Last Action Hero in 1993. He would set a record by receiving $4 million for writing The Long Kiss Goodnight in 1994.

Black made his directorial debut with 2005's Kiss Kiss Bang Bang, and later directed (and co-wrote with Drew Pearce) 2013's Iron Man 3, which ranks as the fifteenth-highest-grossing film of all time worldwide.

Black next directed the action comedy The Nice Guys, starring Russell Crowe and Ryan Gosling, and produced by Joel Silver. Warner Bros. handles North American rights to the film, which was released on May 20, 2016.

In June 2014, it was also announced that Black would co-write with Fred Dekker and direct alone the next film in the Predator series. The film will be titled The Predator and will be released on September 14, 2018.

Black's next projects include an adaptation of Doc Savage, and The Destroyer, based on the 1985 film Remo Williams: The Adventure Begins, starring Fred Ward. He was also briefly attached by Warner Bros. in 2011, to direct a live-action American adaptation of the popular Japanese supernatural-thriller manga series: "Death Note", bringing his close collabrators: Anthony Bagarozzi and Charles Mondry to write the screenplay, replacing Charley and Vlas Parlapanides as the project's previous screenwriters. However, by 2014, he had quietly left the project, due to reported creative differences and other commitments. The studio had intended to omit "Shinigamis" (Japanese gods of death), who were originally present in the manga series, from the film's storyline, and revamp the main character: Light Yagami, into a more benelovent and sympathetic protagonist and change the story's moral theme of justice into one of vengeance, which Black had opposed, who intended to create a more faithful adaptation of the original manga. Adding to that, he decided to focus more on his "Doc Savage" and "Predator" projects, which resulted in his absence from the project's later developments and horror director: Adam Wingard being eventually hired to helm "Death Note" in 2015.

Black has a recognizable writing style characterized by stories in which two main characters become friends and trade witty dialogue, featuring labyrinthine crime plots, often set during Christmas time. The quips he incorporates into his scripts are referred to as "Shane Blackisms", in which jokes about the story situations are included in the scene directions of the script. He also sometimes directs comments at studio executives and script readers. Examples of these include:

“    EXT. POSH BEVERLY HILLS HOME – TWILIGHT
The kind of house that I'll buy if this movie is a huge hit. Chrome. Glass. Carved wood. Plus an outdoor solarium: A glass structure, like a greenhouse only there's a big swimming pool inside. This is a really great place to have sex.  ”
From The Last Boy Scout:

“    Remember Jimmy's friend, Henry, who we met briefly near the opening of the film? Of course you do, you're a highly-paid reader or development person.    ”

This approach, which Black summed as "more open to the reader" and aimed at "trying to keep people awake", was described by himself as a combination of William Goldman, his mentor in screenwriting, and Walter Hill, who had a "terse and Spartan, punchy prose". Black gave a list of techniques he uses when writing films in an interview with The Guardian.

Black explains that Christmas, which has been used as a backdrop in Lethal Weapon, The Long Kiss Goodnight, Kiss Kiss Bang Bang, Iron Man 3 and The Nice Guys, is a touchstone for him, explaining:

Christmas represents a little stutter in the march of days, a hush in which we have a chance to assess and retrospect our lives. I tend to think also that it just informs as a backdrop. The first time I noticed it was Three Days of the Condor, the Sydney Pollack film, where Christmas in the background adds this really odd, chilling counterpoint to the espionage plot. I also think that Christmas is just a thing of beauty, especially as it applies to places like Los Angeles, where it's not so obvious, and you have to dig for it, like little nuggets. One night, on Christmas Eve, I walked past a Mexican lunch wagon serving tacos, and I saw this little string, and on it was a little broken plastic figurine, with a light bulb inside it, of the Virgin Mary. And I thought, that's just a little hidden piece of magic. You know, all around the city are little slices, little icons of Christmas, that are as effective and beautiful in and of themselves as any 40-foot Christmas tree on the lawn of the White House. So that, in a lot of words, is the answer. 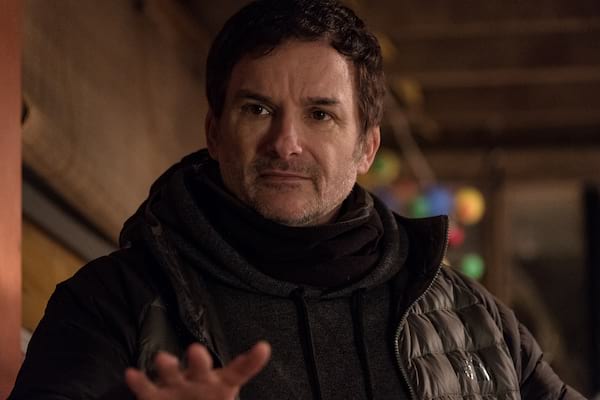 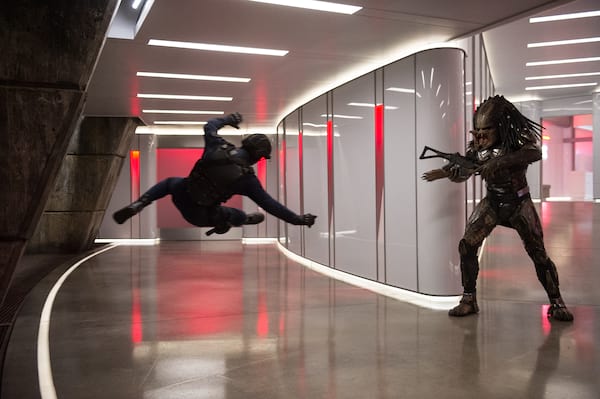 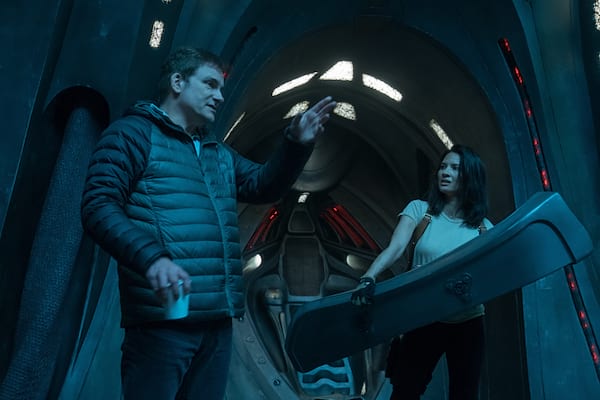 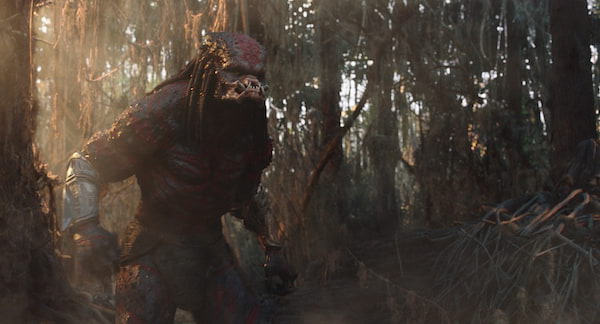